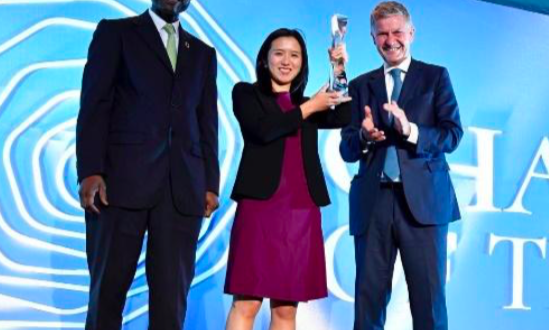 Smart dockless bikeshare company Mobike, was named among the 2017 Champions of the Earth by the United Nations Environment in recognition of the company’s transformative contribution to the advancement of low carbon public transport.

The award was presented to Mobike founder and President Ms. Hu Weiwei at a special ceremony during the Third Annual UN Environment Assembly held this week in Nairobi, Kenya.

The Champions of the Earth award is the UN’s highest environmental honour; it celebrates outstanding figures from the public and private sectors and from civil society whose actions have had a transformative, positive impact on the environment. Since its foundation 14 years ago, the awards have recognized over 80 laureates – ranging from leaders of nations to grassroots activists – in the categories of policy, science, business and civil society.

“When we first started Mobike, our goal was to change cities by making bikes available to everyone. The humble bicycle can not only change people and cities, but can also help change the world – both as a universal symbol of peace, and as a weapon in the fight against climate change,” Hu Weiwei said upon receiving the award.

“Indeed, we believe that innovation, technology, and public participation are essential to meeting the United Nations Sustainable Development Goals. That is why we would like to invite governments, NGO’s, cities, communities and businesses to join us at Mobike – together with the United Nations – to embrace bike-sharing, and create a pedal-powered green economy for the future.”

Mobike is receiving the award in the Entrepreneurial Vision category, in recognition of its achievements in applying its business model to improve urban eco-mobility while addressing the challenge of urban air pollution and reducing carbon emissions.