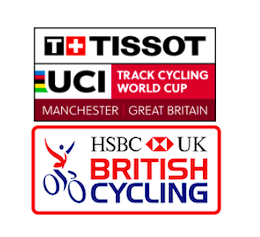 British Cycling – in partnership with UK Sport and Manchester City Council – has confirmed that Manchester’s HSBC UK National Cycling Centre will host a round of the 2017/18 TISSOT UCI Track Cycling World Cup later this year.

The National Lottery-funded event will take place from November 10th to the 12th at the home of British Cycling and the Great Britain Cycling Team, with the world’s premier track cycling series returning to Manchester for the first time since 2013.

The Manchester event will be the second round of the 2017-18 TISSOT UCI Track Cycling World Cup series, the UCI has announced, with the 2017 rounds taking place in Pruszków, Poland, Milton, Canada and Santiago, Chile.

British Cycling’s director of cycling Jonny Clay said of the announcement: “The venue has a proud history of staging major international track events, and the record-breaking ticket sales for the recent 2017 HSBC UK National Track Championships in Manchester showed that the appetite for track cycling is stronger than ever.”

Manchester City Council’s executive member for culture and leisure councillor Luthfur Rahman added: “Attracting prestigious events of the calibre of the TISSOT UCI Track Cycling World Cup to Manchester will help us in our goal to get more people of all ages into cycling. Our city is proud to host the busiest velodrome in the world and – in partnership with British Cycling – we will continue to encourage as many local residents as possible to take advantage of this world-class facility."

Tickets for the TISSOT UCI Track Cycling World Cup in Manchester will go on general sale on Tuesday, May 23rd with British Cycling members having access to an exclusive pre-sale period from Thursday, May 23rd until Monday, May 22nd.

The latest event news is available on the event website www.trackworldcup.co.uk.