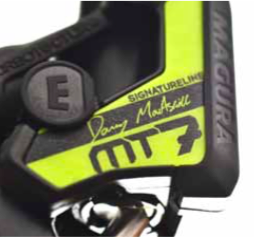 The new MT7 Danny MacAskill signature model brake will be available from Magura in the coming months.

The new unit will be sold in a limited edition run with unique signature packaging. It will feature a range of customised features, such as four-piston brake power, an ergonomic one-finger brake lever, maximum adjustability and optimum brake modulation.

The unit will ship in a signature neon yellow colourway at MacAskill’s request, and will feature customised graphics on all parts.

MacAskill commented: “I was thrilled by the HS Raceline, which all my role models rode. This is why the Magura neon yellow still means so much to me today.”

The unit weighs in at 375g, and is constructed from Carbotecture SL and hollow aluminium. It features a Magura signature disc tube, and ships with Royal Blood brake fluid.

The new brake will be on display at the Core Bike show in 2017.