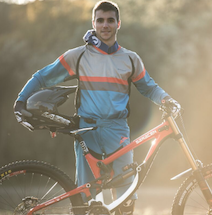 The Madison Saracen Factory Team has welcomed Alex Marin, who will join Marc Beaumont, Matt Simmonds and Matt Walker to compete in the 2017 roster.

Marin – who was previously part of the Giant Factory Racing Team – was a regular fixture on the Junior World Cup podium in 2015. The professional rider has established himself at the highest level in his first year of elite racing.

“I’m excited to welcome Alex Marin. He’s a true racer; he brings an enthusiasm and passion to the team that we all relate to and are inspired by,” commented team manager Will Longden.

“I’ve watched him at the world cup races and he has great natural style. He also had some really strong results as a junior and a first-year elite rider and we want to help him hone those skills and work with our great set up to find consistency and enjoy his racing.

“His personality really fits in well with the rest of our team of Matt Simmonds, Marc Beaumont and Matt Walker and I think it’s going to be a great year for the Madison Saracen Factory Team.”

Marin has already been testing the new Saracen Myst Carbon on his home trails. He added: “Coming into the 2017 season, I feel like I have more to give at the races. The last three years on the world cup circuit went well and my first-year elite I had some good results as well, but as I said, I thought I could be more consistent with those good results.

“Madison Saracen was the team that I felt I could fit in with, being a team close to where I live and with great people around; people that make me feel like I can give my 100% with no doubt.

“I have to say that the bike is the best I’ve ever tried, a stable bike that makes me feel I can go faster under control. I feel really stoked and excited about joining the team and looking forward to the next race already!”

Madison Saracen will prepare for the 2017 world cup series with a host of races in Portugal throughout March, with the opening round of the British Downhill Series in early April.