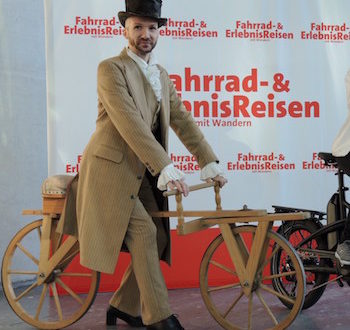 City where it all kicked off celebrates 200 years of bicycling

Mannheim in Germany is rolling out the red carpet for cyclists this year as it celebrates the two-hundredth anniversary of the invention of the proto-bicycle. The Draisinne was created by Karl von Drais, a forestry civil-servant and lowly aristocrat who lived in the city. The Laufmaschine – or "running machine" – was famously ridden in the gardens of Mannheim Schloss, and this castle will be one of the locations for a great many celebratory events in the city this year.

Under slogan of "Mannheim Bike – Where it all began” there will be events such as a year-long exhibition in the city’s technical museum, and on 16th September there will be a son-et-lumiere show set against the walls of Mannheim Schloss. "The magnificent building forms a fitting backdrop for a unique finale," says the local tourist board. "In a multivisual journey of theatre, music and light, the global triumph of the bicycle will be enacted and celebrated."

There will also be a cycle conference in April, and a weekend bike festival in mid-June. Cycle touring in the Mannheim region is being promoted throughout the year. One of the sponsor’s of the celebrations is Ortleib, the German cycle pannier company. The chosen charity for Mannheim’s Year of the Bike is SRAM’s seed-funded World Bicycle Relief. Some of the monies raised will be bicycle-themed: Germany has rolled out a twenty Euro coin featuring the Laufmaschine.

The creation of the wooden Laufmaschine didn’t enrich the inventor. This was because, according to an eminent historian, the "draisine" was pirated. "Artisans built copies on their own merely based on the text of the news," Professor Hans-Erhard Lessing told BikeBiz.

"There was no global patent law covering all German duchies until the imperial one of 1877. In Dresden alone, five copiers built more or less sensible variants of Drais’s original design."

Dr. Lessing, author of books in German on Drais, and co-author of the English-language Bicycle Design of 2014 added that the knock-offs lacked key features, and were, therefore, dangerous to both users and onlookers. "All British velocipedes lacked brakes and trail for self-alignment, causing unpleasant collisions with pedestrians on sidewalks."

Dr. Lessing believes these collisions, caused by poor copies, were probably the "main reason for the clampdown on hobby-horses by the authorities in London and elsewhere." There were also diatribes against running machines in newspapers of the day.

The first draisines were made-to-measure to optimise the rider’s stride, resulting in a perhaps surprising fast pace on the Kunstrassen, the German coaching roads of the time.

Some riders went on long-distance tours with their machines – Drais rode to Paris on a later, souped-up version of his. These touring draisines had space for pannier bags and bedding rolls.

The craze for what were also called hobby- or dandy-horses had fizzled out by the early 1820s – "pirating killed the idea," says Dr. Lessing. When in the late 1860s innovators resurrected the velocipede by added pedals the craze reignited.

So, Drais’ machine led almost immediately to fast cycling, a trade in counterfeit bicycles, anatomical cycle fitting, riding on both roads and pavements, bikepacking, and the first anti-cycling articles in the mainstream media.

Thanks to Uwe Weissflog for the pix