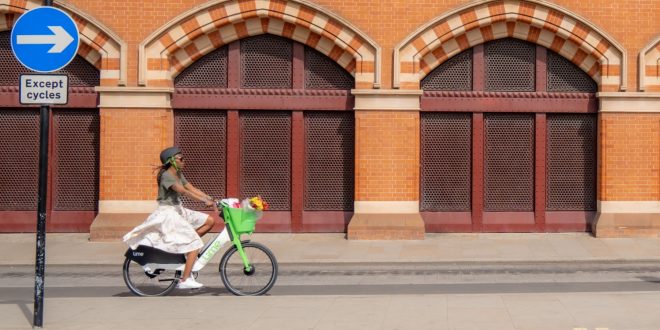 With a variety of technology upgrades and a more recognisable lime green design, the Gen4 e-bikes will replace Lime’s current fleet of red e-bikes throughout the capital over the course of June.

Alan Clarke, senior director of policy for Lime UK&I, said: “Since launching in London back in 2018 we’ve achieved over six million rides, with our red e-bikes becoming a recognisable and popular addition to the city’s transport network.

“You’ll start to see our new wheels hitting London’s roads, with more Lime bikes available to hire than ever before thanks to our ongoing expansion into new Boroughs such as Hackney later this month.

“We know from demand that people in London want to live more sustainable and active lifestyles. Our new Gen4 is here to provide them with a new and improved Lime-green ride, and they will be some of the first Lime riders outside of the US to try our latest model. It marks our commitment to bringing Londoners the very best and latest innovation in sustainable transport.”

Key features and benefits of Lime’s new Gen4 e-bike include:

– Increased motor power to help riders easily climb hills and restart their ride when stopped/stationary at red traffic lights or zebra crossings
– A new phone holder, allowing riders to easily navigate and follow directions without having to stop and look at their phones
– An automatic two-speed transmission that eliminates the prior generation’s gears for easier acceleration and smoother riding
– A modular design, extending the usable life to 5+ years

The new model also includes an interchangeable battery system, which means its e-bike batteries will now be shared and swappable with Lime’s e-scooters in London. Previously, the two vehicles had two different battery systems.

Lime has also launched its new and approved battery in London to improve rider experience. The new model of battery has double the power of previous models, and results from initial testing of the new batteries found riders travelled more than twice as far on a single battery charge compared to Lime’s previous batteries.

The launch of Lime’s newest e-bike in London also follows the launch of its newest model of e-scooters in both Salford and Milton Keynes last week in a new £1 million investment commitment to both cities.