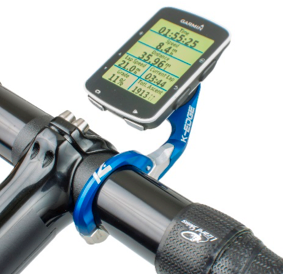 K-EDGE has announced the release of two brand new cycle computer mounts that are aimed at competitive riders.

K-EDGE is introducing the Race Mount, which at 32 grams is 33 per cent lighter than the Pro Mounts. Two versions are available, one optimised for Garmin units – available in a selection of colours – and a second that is optimised for the new Wahoo Bolt, which comes in black. As the mount chosen by pro teams such as Team Sky and Quick Step, the new Race Mount is pro-level kit for the user’s bike and retails for £54.99.

For the more aero-inclined riders, the new K-EDGE Sport TT Mount is a simple and lightweight mount for positioning the cycling computer between aero bars. The single bolt clamp and pivoting mount design offer a multitude of positions for all computers. It weighs 29 grams, is available in black, red and blue and is compatible with all Garmin Edge cycling computers – RRP of £39.99. Both are made of K-EDGE’s CNC-machined aluminium.

K-EDGE brand manager at Madiso John Harris said: “We are really excited about the new K-EDGE Race Mount and Sport TT Mount. Both of these are aimed at serious riders that need the data from their Garmin units but want to integrate them into their bike as seamlessly as possible.

“With so many professional teams using K-EDGE, it really is a testament to the engineering and effort that goes into making the product the best that it can be. The new Race Mount and Sport TT Mount further demonstrate the brand’s commitment to excellence. ”

Madison will begin distributing both K-EDGE mounts immediately. If you have a stocking enquiry, get in touch with your local sales agent or visit www.madisonb2b.co.uk.