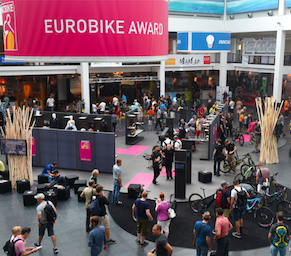 Entries are now open for the Eurobike Awards 2017.

Last year, some 500 new products and innovations were entered and 51 winners were finally selected. The 2017 awards will see the addition of a new separate category for pioneering start-ups.

“We have introduced the Start-up Award category for the growing number of newly-established businesses in the bike industry that also exhibit at Eurobike. We look forward to receiving large numbers of applications from innovative bike start-ups,” said Eurobike project manager Dirk Heidrich.

Eurobike Award evaluation continues with a two-stage process introduced for the first time last year. “The large number of products entered pushed the previous judging process to its limits. This is why we introduced a new system. And it has proven successful,” explains Heidrich.

In the first round a shortlist is drawn up. An extended international expert panel made up of twelve judges initially assess all entries in a digital review process. Entrants considered potentially worthy of an award are shortlisted and go into the final round, where a panel of six judges test and evaluate the innovative bike products over two days.

During the two-day panel meeting, the judges make their decisions for the winners of the Eurobike Awards, the Gold Awards and the Start-Up Awards. They are looking for pioneering products that set new standards in terms of design, functionality and quality.

In addition, there is a Green Award for particularly sustainable innovations. As in previous years, the judges’ panel meeting is organised and presided over by the Deutscher Designer Club for Messe Friedrichshafen.