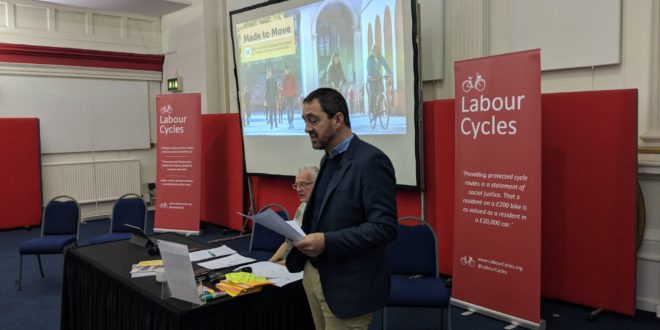 “It’s not about bikes, it’s about making nicer places to live”

Olympian and Manchester’s walking and cycling commissioner Chris Boardman gave a keynote speech at the launch event for Labour Cycles on Saturday. This new organisation – revealed previously on BikeBiz – aims to get Labour to commit to firmer, more progressive cycling policies, including provision of protected cycleways.

The official launch event for the new lobbying group was held in Manchester on Saturday, and others in attendance included shadow minister for transport Rachael Maskell and Hackney councillor Feryal Demirci. Labour Cycles was created by, among others, transport writer and prospective Labour candidate Christian Wolmar, and Chris and Jono Kenyon of CyclingWorks.

"A protected cycle lane is a statement of social justice; that a resident on a £100 bike is as valued as a resident in a £10,000 car," said a stand-up banner at the well-attended event.

Labour Cycles will be lobbying for:

At the launch event Boardman said: "It’s not about bikes, it’s about making nicer places to live." Other speakers agreed, including Dr. Adrian Davis, author of Public Health England’s Active Travel Guide for Local Authorities who said active travel was a "wonder drug."

Previously, Chris Kenyon said that: "As the party of the NHS, it is Labour’s duty to reduce burdens upon the service and provide equitable public health. With so many doctors and health professionals calling for more active travel, the time has come for significant change. Active travel can no longer be for the brave."

Delegates at the launch of Labour Cycles shaped a formal submission that will be delivered in due course to the Labour Policy Forum.