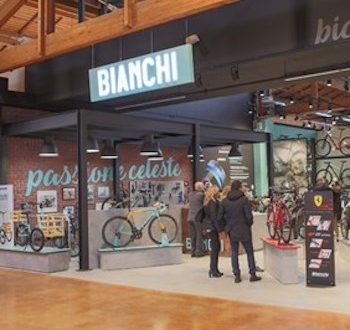 Italian Prime Minister Paolo Gentiloni has opened a Bianchi concept store in Bologna. Its sited within FICO Eataly World, said to be the "biggest agricultural theme park in the world." (FICO stands for "Italian Farming Culture".)

Visitors to the €120m 100,000-sq-m shopping mall, which opened today, will be able to use Bianchi ‘Fico’ cargotrikes developed by the company last year. The trikes are equipped with front and rear wooden baskets and have a tillting front end. Visitors to the FICO indoor mall can use the bikes to get around the Ikea-style aisles. 500 of the trikes have been provided via the bike-share operator Bici in Citta.

Bianchi owner and chairman Salvatore Grimaldi was at the store opening. He said:

“Bianchi is proud to be part of FICO, and it was a honour for us to welcome the Italian Prime Minister in this very important event."

The Bianchi Shopping Bike – called the Fico – has 20” wheels.

The FICO mall took four years to complete, works with over 150 Italian companies, and has created over 3,000 jobs, but it’s already been ribbed by The Guardian, which said "many are struggling to make sense of a project that stands in direct contrast to the traditional allure of Italian gastronomy – the pleasure of meandering the farmers’ markets in Renaissance town squares, or sampling the delights of small producers in remote hilltop towns."