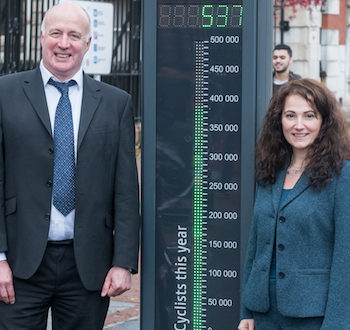 More than one million cycle journeys have been made on the Oxford Road and Wilmslow Road Cycleway in Manchester since recording began in September last year, states Transport for Greater Manchester.

The milestone was reached this week, just over one month after the digital cycle counters outside Manchester Royal Infirmary on Oxford Road recorded 5,000 two-way cycle journeys on a single day for the first time.

The cycleways from Fallowfield to Oxford Street in Manchester city centre are physically separated from the main carriageway by kerbing.

Greater Manchester Cycling and Walking Commissioner, Chris Boardman, said: “I’m not surprised that the Wilmslow Road and Oxford Road cycleway has been a huge success.

“It proves that, if you build high-quality cycle lanes that are separated from other traffic, people will use them.

“It may sound strange, but bike lanes aren’t for cyclists – they’re for motorists. They’re the people we need to get to change if we’re to make a major shift in the way we travel around our towns and cities.

“More than 30 percent of journeys in Greater Manchester under 1km are made by car, so the potential here is absolutely enormous. One million cycle journeys counted on Oxford Road in 14 months is a fantastic figure, and I hope we reach the second million in even quicker time.”

“The Oxford Road and Wilmslow Road Cycleway has helped to encourage many more Mancunians to get on their bikes and we’re heartened by the evident success of this scheme.

“Investing in high-quality infrastructure of this kind is just one of the ways in which we’re helping to promote cycling in Manchester and, while there’s more work to be done, passing the milestone of one million cycle journeys in just over a year is an impressive start. We are determined to build on this success.”

Share
Previous Italian Prime Minister opens Bianchi concept store in a foodie mall
Next Corsa you can have a built-in bike rack!