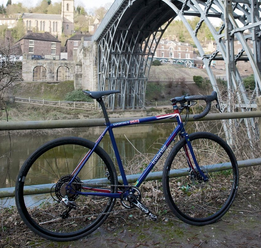 The Cyclist Magazine Choice Award is historically presented to a bicycle that embodies the heritage, ethos and craftsmanship of hand made bicycles.

“Ironbridge the bikes are exceptionally well crafted, but it’s the Ironbridge ethos that resonated with Cyclist: take decades worth of frame building knowhow from the guys at Swallow, distil it into a range of beautifully designed frames and share the task of manufacturing around independent UK frame builders,” said Cyclist magazine judge James Spencer.

“The long-term benefit for the local handmade bicycle industry could be huge, and the rider-consumer will reap the rewards. Just look at that brake bridge”

Bespoked – which was held at Brunel’s Old Station, Bristol from April 7th-9th – featured a host of artisan bicycle makers who exhibited their creations from all over Europe. Sponsored by Cyclist Magazine, the event is attended by thousands of cycling enthusiasts interested in the design, innovation, manufacture and craftsmanship of handmade bicycles.