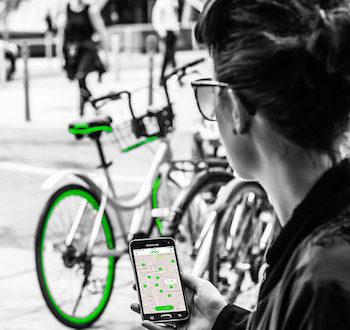 Urbo of Dublin is seeking cash to expand its roll-out of dockless bike share bikes. The self-funded start-up is looking to raise an initial €5m before another round of fundraising in 2018.

The firm launched its first scheme in London last month, dropping 250 of its lime-green bikes in Waltham Forest with the cooperation of the borough council. (Walthamstow Cycles was awarded the contract to assemble and service the bikes.)

Urbo Solutions was founded by Shane Connaughton of Dublin’s Cycleways bike shop and Iain Cameron, managing director of Ireland’s Bike to Work scheme. The pair teamed up with Brian and Tom McGovern, founders of the Dublin School of Grinds private tuition firm.

“As a bike guy, I know the size of this industry, and dockless bike sharing is going to change everything,” Connaughton told BikeBiz earlier this year.

"[Dockless] is the most disruptive thing that’s happened to our industry for a long time. The cash that is being pumped into the sector is unprecedented in the bike world.”

Brian McGovern told The Irish Times: "We have seed-funded the business ourselves to date and have just started our fundraising of €5m. We plan to go back to the market for a significant round B in the second or third quarter of 2018."

At the start of 2016, Mobike of China, now the world’s biggest operator with approaching ten million bikes, operated one scheme in a district of Shanghai; by the end of its first year it had expanded to 100 cities. In June, Tencent, Sequoia Capital, TPG and Hillhouse raised a $600m investment pot for Mobike.

Ofo, the world’s second biggest operator, also has nearly 10 million bikes. It operates in thirteen countries, including the Czech Republic, Italy, Russia and the Netherlands. It was founded in 2014 and is valued at over $2 billion after raising over £541m in Series E financing round in July. Investors include Alibaba, Hony Capital and Citic Private Equity. By the end of the year, Ofo plans to have 20 million bikes on the road.

The dockless bike sector in China, while huge with 70 operators and 16 million cycles, has been beset with user-generated problems, notably the “dumping” of bicycles on pavements, leading to what detractors have said is “littering,” a claim rarely used by municipalities or motorists against parked cars.

Urbo aims to install dockless schemes in cooperation with local authorities, and to use the GPS chips on its bikes to make sure they are parked in designated places.