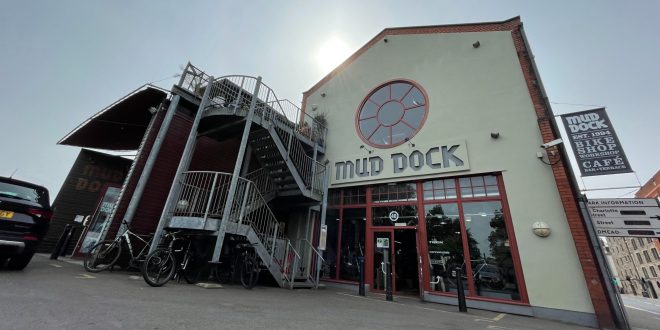 I can’t actually remember a time before this unique restaurant/bike shop existed, as the business opened in 1994, two years after I was born, but I have plenty of memories from past visits – Mud Dock was the first time I ever saw Cannondale’s Lefty fork design for example, or more recently watching Matt Stephens take an angle grinder to LiteLok’s newest lock, during a product launch held at the venue.

I visited Mud Dock again on a mild November day, to meet the founder and owner Jerry Arron, to hear how this hybrid business has changed over the past three decades.

No regrets
“It was quite a long time ago now,” said Arron on the founding of Mud Dock, speaking from his favourite window seat overlooking the water in the first-floor restaurant. But I can look back at it with a bit of perspective. The good thing is I have absolutely no regrets.”

Establishing Mud Dock involved huge risk, for Arron and his co-founder and wife Beverley. Both successful graphic designers living in London in the mid-90s, the couple decided to pack up their lives and move to Bristol, a city where they had no links, to escape the capital and try to find a living in a new industry.

“It was all about the journey of moving away from London, where we’d live for 12 years or maybe longer, living an urban life working in an industry that was quite buzzy. I had two young kids, it was very difficult to cycle recreationally in London. And I also wanted to give catering a go as well.

“Beverly and I had a vision for how we could incorporate doing an interesting cafe-bar with cycling retail, incorporating the two, but the location was going to be critical both in terms of the geographic location and the building.”

Bristol was actually the last location Jerry and Beverly considered for their location, having already explored Brighton, Oxford, and Bath. Having never been to Bristol before, the couple immediately had a good feeling about the place. They quickly found a semi-derelict site, which still had six years left on the lease, meaning they couldn’t yet own the property, but using funds from the sale of their house in London, they got to work converting the old industrial site into a vibrant cafe and bike shop.

“It was risky – we were putting money into a building we didn’t own, neither of us had any experience in retail, our experience in catering was very limited, everyone we spoke to said ‘do not set up a business down there,’ so everything conspired to suggest that it was going to fail miserably. But it hasn’t, and I think that’s testimony to a sound vision in the first place, and to the quality of people we’ve employed in the last 30-or-so years.“ 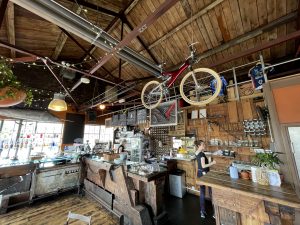 Keepsakes
Over Mud Dock’s history, Arron has collected a scrapbook full of press clippings about the business, from early restaurant reviews, to fashion articles linked with cycling enthusiast and fashion designer Paul Smith, a one-time customer of Mud Dock. Scanning through the pages of the scrapbook, what’s clear is the wider appeal of the venue, which reaches far beyond the cycling scene.

From restaurant reviews in national publications to news articles in the local Bristol Post paper, and even a 1999 piece about refitting your bike shop in the pages of this very magazine, Mud Dock has long captured the imagination.

With its museum of ‘90s mountain bikes suspended above the diners, and popular roof terrace overlooking the harbour, Mud Dock’s stylishness plays a huge role in its success. But of course Mud Dock is not just a restaurant, it’s also a bike shop.

Arron said he sees the business as a 50/50 split between catering and retail. So how has the cycling business changed since its inception? “We had to change aspects of what we had put together in the first place very quickly, because the best way of finding out how things should be is opening the doors and seeing how people respond.

“For example, more than 50% of the first floor area was given over to cycle retail, but very quickly we felt the pressure on the space in the cafe. We couldn’t satisfy that demand, so we had to condense all the bike retail stuff on the ground floor, and turn the whole of the first floor over to what subsequently became more of a restaurant.”

Mud Dock started as a specialist in the latest mountain bike technology, riding the wave of full suspension bikes and rapidly evolving design, but today the business has adapted to reach more everyday cyclists.

“Now our biggest account is with Brompton. 30 years ago I never would have set this business up on the basis of selling the number of Bromptons we sell. We’re also on the cusp of an electric cargo bike revolution. I can see it happening, because with the Tern GSDs, we can’t get enough of them.

“That’s quite exciting in a city like Bristol, with people thinking about doing away with the second car, or buying things like the Tern GSDs for the school run, shopping or just generally getting about. I do very much see that opportunity, and I think fortunately we’re right there on it.”

The team
The bike shop team operates with two mechanics, then two other full time shop floor staff (manager and assistant manager), and three part-time workers. During my visit to Mud Dock, I also had the opportunity to speak with assistant manager Charlie Parry, 23.

Parry started his cycle industry career straight out of school, joining Cycle Republic in the centre of Bristol, before switching to Mud Dock where he has now been working for three years, and as assistant manager for the past year.

On the trends he’s seen in the industry in the last four years, Parry said: “Cargo bikes are really on the up, and gravel has really changed in the bike shops I’ve been in. Gravel wasn’t such a big thing a few years ago. The rise of the cargo bike and Brompton, these utility bikes. These bikes are still pretty popular, whereas your hobby bikes, your high-end road bikes are much quieter, partly because of the time of year.”

On the difference between working at Mud Dock and working for a high street chain, Parry said: “There’s a big difference. Rather than just standing on tills and scanning, being here is great. When I was at Cycle Surgery it was owned by Halfords, there was no dealing with supplies, there was no warranty stuff or anything like that. You just phoned someone and they dealt with it. 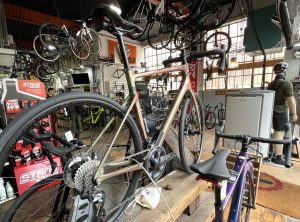 “Here it’s great to meet people, we had a couple of reps in yesterday, it means you get more experience and it’s way nicer. We’re in a good spot here because we’re close enough to the centre of town, we get a good amount of footfall and people are able to walk to us.

“I think the cafe is so popular among everyone now, not just cyclists. If a group of cyclists turned up on a Saturday morning without booking a table, they wouldn’t find a space. So that’s something I think we’re trying to sort out.”

Lessons learned
With almost 30 years in the business, Arron has picked up plenty of knowledge, and I was keen to learn what his top tips would be for cycle retailers: “A major one is not overcommitting, I think that’s a lesson.

“You need to be able to switch your focus fairly quickly, and if something’s not working don’t just persevere with it. It’s difficult, because you might be passionate about downhilling and you’ve got 20 great downhill customers, but they’ve all got a bike now, so where is your future business coming from? You’ve got to be flexible, and you’ve got to make sure you’re not overstocked, because that could be a problem if that market dries up.”

Learning through experience, Mud Dock has moved away from selling cycling clothing, now only keeping a tight range of cycling apparel and cycling shoes in stock, as Arron believes that clothing is no longer a good seller for bricks and mortar retailers, owing to online sales and extensive discounting.

And finally, I was curious about the legacy of Mud Dock,and what Arron was most proud of: “I think how we differ from a lot of places is that we create cyclists. Over the years we’ve put about 15,000 people on bicycles. If I’m looking for something to put on my grave, something that I was pleased to have done, it was creating cyclists, because it’s good for them, good for the city of Bristol, it’s good for the environment – there’s nothing bad about it.”

Previous RockShox Flight Attendant now available as an aftermarket upgrade kit
Next ‘This is a magic moment in Brompton’s history’: Brompton unveils its millionth folding bike with global tour announced 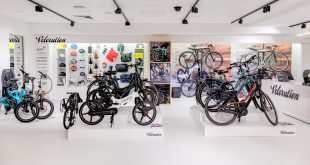 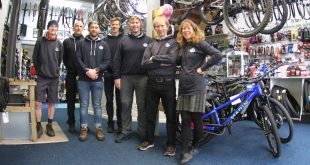 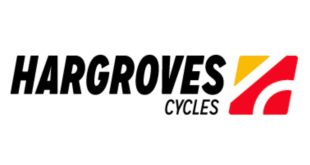