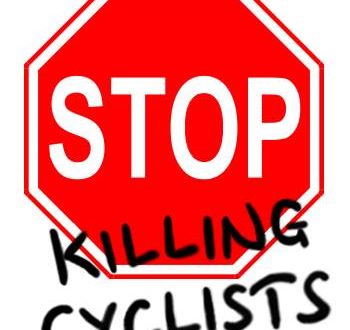 Hundreds of cyclists staged a ‘die-in’ outside Parliament on Saturday, to call on politicians to make roads safer for bikes.

The event, called the National Funeral for the Unknown Cyclist, was organised by campaign group Stop Killing Cyclists.

The group followed a horse-drawn hearse through central London and staged a peaceful protest outside Parliament.

Its Facebook page said the protest "is to condemn all existing and previous governments from all the major parties for their failure to take comprehensive action on safer cycling".

The group is calling on the government to invest £3 billion a year on cycling.

The procession left Lincoln’s Inn Fields at 1pm, then marched via Embankment to Parliament.

Stop Killing Cyclists was founded after London’s biggest ever bike die-in outside TfL headquarters in November 2013.