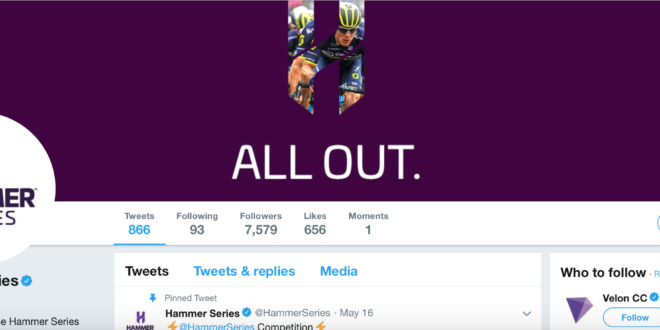 All races in the Hammer Series this year will be streamed live on Twitter.

Alongside the Twitter live broadcast, fans will be able to digest key data snapshots from the riders in Velon’s Twitter account, with a flow of tweets highlighting major events as they happen.

Spectators will also be able to comment and share the action from Hammer Stavanger, Hammer Limburg and Hammer Hong Kong as it unfolds, using a custom emoji created specifically for the events, which will be activated using the hashtag #HammerSeries.

Simone Tomassetti, head of sports partnerships, Southern Europe at Twitter, said: “We’re excited to collaborate with Hammer Series to bring all three races this year live on Twitter and access to VelonLive race data alongside the best real-time conversation. Passionate Hammer Series fans will find all they are interested in about the race series at Twitter.”

Graham Bartlett, chief executive of Velon, added: “We feel that Twitter is a natural home for Hammer races. The whole idea for the races is to deliver more to the fans and watching on Twitter means you can follow the race wherever you are and at the same time see all the other great content we share about the race as you watch the action.”

Hammer Hong Kong, presented by Sun Hung Kai Properties, is the latest Hammer Series race to be announced, taking place on 14th October. The race will be staged as part of the Hong Kong Cyclothon festival of cycling.

Mark Buttermann, director of summer sports at Infront, concluded: "We are excited about this new agreement with Twitter for all three Hammer races. This partnership enables cycling fans to get even closer to the live action of the peloton and Hammer’s impact style of racing for free wherever they are. The introduction of the dedicated VelonLive Race Twitter account will deepen fans’ experience and increase their understanding of the races and the sport."