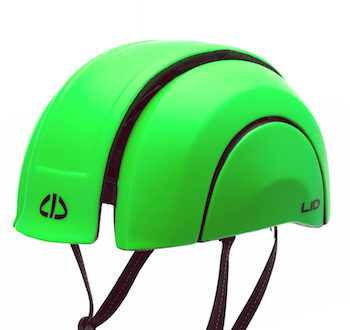 Folding-helmet sector expands with LID made from recycled EPS

The LID is manufactured from recycled materials, including EPS that, in a former life, protected car parts before being made into pellets.

Terry said a "common complaint amongst cyclists in that helmets are a hassle and unstylish," and that his offering combats those negatives.

He added that LID will become a direct-to-consumer £75 offering through his start-up’s website, and on Amazon and via a "select handful of independent bike shops in large cities."

The helmet is certified for European (EN1078) and North American (CPSC) standards. When folded it is held together by magnets.

Existing folding cycle-helmets include those from Morpher, Overage, Closca, Carrera, and Brooks.