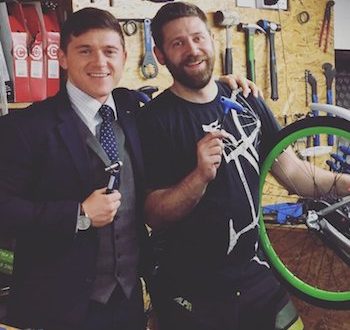 Urbo dockless bike-share bikes will be landing in the London Borough of Waltham Forest on October 31st. And local bike shop Walthamstow Cycles has been awarded the contract to assemble and service the bikes.

(As the name suggests, dockless bike share schemes do not require expensive docks, which usually have to be installed with public subsidies.)

Urbo is an Irish company and will be providing dockless bike-share bikes in a one-year trial in association with Waltham Forest Council. 250 bikes will be placed in the borough. They can be hired for 50p per half hour. If the trial is successful, the scheme will be introduced permanently in Autumn 2018.

To combat the sort of "littering" that has plagued other dockless schemes, especially in Chinese cities, the council is designating 30 areas as "Dockless Bike Parking Zones".

Waltham Forest is noted for the installation of a "mini-Holland" scheme, part of a £27m programme to improve Walthamstow for residents. Not all have been in favour of the remodeling – when, in September 2015, the mini-Holland scheme was opened protestors carried a mock coffin along Orford Road, much to be bemusement of the Dutch ambassador for whom this was his first official engagement. Protestors claimed the traffic-calming on the road would lead to the “death” of Walthamstow village. As it has turned out, the road is now a haven of tranquility.

And, as BikeBiz has previously reported, the expanding cycle infrastructure in Walthamstow, is proving good for local cycle businesses.

And with the winning of the Urbo contract the new dockless bike-share scheme is definitely good for Walthamstow Cycles, a relatively new business.

"We’re delighted to be taking care of the builds and the ongoing maintenance of the Urbo bikes," said the shop’s co-owner Tony Wade.

"We’re also excited to be a part of a scheme to improve accessibility within the Borough, cut car-use for short trips and benefit present and future generations by reducing pollution."

He added: "We’ve been showing the bikes, and promoting the scheme to our customers in advance of the launch, and we’ve received a lot of very positive feedback."

Urbo co-founder Tom McGovern told BikeBiz: "Partnering up with local people and companies is an integral part of the Urbo solution. It plays a key role in both community engagement, and supporting local commerce."

He added: "We design our policies and ways of working to ensure our solution enriches a city or town as much as possible. This ranges from hiring and training local people as ‘Urbo Wardens’, to partnering with a local bike shop like Walthamstow Cycles.

"Not only do Walthamstow Cycles do a fantastic job, they also allow us to better integrate into the community. Becoming a part of the community is imperative to creating a sustainable bike sharing solution. It’s clear that collaboration must take place with local councils, but we must go further than that."

Other dockless bike-share schemes partnering with local bike shops include Ofo which works with Reg Taylor Cycles in Oxford.

“This is the most disruptive thing that’s happened to our industry for a long time,” he said from his company’s stand at the Velo-city conference held in the Netherlands. “The cash that is being pumped into the sector is unprecedented in the bike world.”

Urbo isn’t planning on directly competing with Mobike and Ofo – these Chinese start-ups are fighting to become the Amazon of the dockless bike sharing space – but he believes there will be a niche for a nimble, smaller Euro-based company to bag deals with hotels, towns, and smaller cities that might not initially interest the Chinese companies.