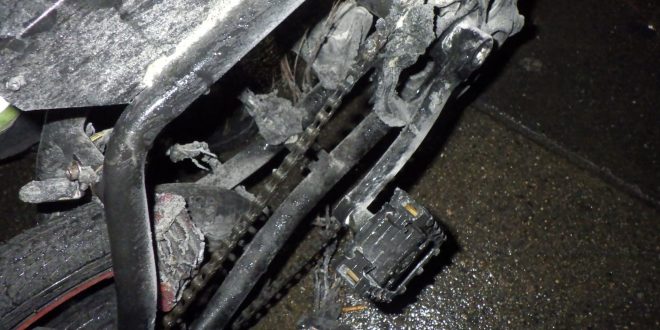 The failure of a lithium-ion battery on a battery pack is believed to have caused a fire in a shop selling second-hand electric bikes in Bethnal Green.

The London Fire Brigade (LFB) said the fire was discovered when the staff heard a loud bang and smoke issuing from an electric bike. They removed the bike outside the shop on Cambridge Heath Road.

A fire crew wearing breathing apparatus entered the shop and extinguished several small fires on the shop floor. Half of the bike and a small amount of the shop was damaged by the blaze.

While the firefighters were at the scene, a second electric bike started to ignite. The battery pack was removed from the bike by fire crews and the batteries from both bikes were submerged in water.

Firefighters tackled a fire at a electric bike shop in #BethnalGreen. The cause of the fire was the failure of an e-bike’s lithium ion battery. We’ve re-issued our important safety warning about how to store and charge the devices #electricalsafetyweek https://t.co/gbiMysLXLj pic.twitter.com/V8Ty8F3Z05

A London Fire Brigade spokesperson said: “Batteries can present a fire risk if they’re over-charged, short-circuited, submerged in water or damaged, so it’s really important to protect them against being damaged and to charge them safely.”

The London Fire Brigade has said it attended over 70 fires involving e-scooters and e-bikes in 2021, and the majority of these fires happened in homes.

Firefighters earlier this year issued an e-bike safety warning following a serious blaze at a block of flats in Shepherd’s Bush, caused by the failure of an e-bike lithium-ion battery.

The Brigade’s assistant commissioner for Fire Safety Charlie Pugsley said: “It’s incredibly concerning that we are continuing to see a rise in incidents involving e-bikes.

“When these batteries and chargers fail, they do so with ferocity and because the fires develop so rapidly the situation can quickly become incredibly serious. These items are often stored in communal areas and corridors and can block people’s only means of escape.

“Another issue with fires involving lithium-ion batteries and which we saw at yesterday’s fire is that when they fail, they eject their contents over a wide area which can lead to multiple areas of burning in the room where the fire has started.”

In 2021, Transport for London banned privately-owned e-scooters from London’s transport network due to safety concerns about these items following recent fires on TfL premises and services.

US firefighters recently hosted a national event to raise awareness about the potential risks posed by lithium-ion batteries, following concerns about the rise of e-bike and e-scooter fires.