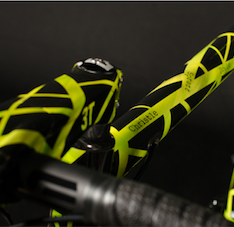 FiftyOne has teamed up with Aqua Blue rider Ronan McLaughlin to build a bike for this year’s 2017 An Post Rás.

McLaughlin raced internationally for six years and represented Ireland at the 2012 Elite World Championships. He was a member of the An Post-Sean Kelly Team. During the fourth stage of the 2012 An Post Rás, McLaughlin broke away from the peloton and stayed out on his own for over 70 kilometres but was caught with 100 metres to go.

FiftyOne founder Aidan Duff met with McLaughlin at the Rás launch earlier this year where he told Duff about his past bikes and what aspects of those bikes he preferred. McLaughlin preferred the cornering from his Dolan, which he rode during his time with An Post-CRC; he favoured the responsiveness of his Pinarello whilst struggling with the shortness of the top tube. His S-Works Tarmac was the best for comfort but he couldn’t get low enough on the bike.

“Not only did we incorporate the measurements from the bike fit report but we ensured the bike would incorporate all of Ronan’s favourite characteristics. To top it all off, Ronan and I designed a frame that would stand out and be totally unique to him,” commented Duff

Following a bike fit report and conducting research into those bikes, FiftyOne went to work incorporating McLaughlin’s optimal attributes to his new bike.

As the build started, attentions were turned to the paint job. Ronan provided Aidan with a photo of the Northern Lights, which can be seen at Malin Head, Co. Donegal, McLaughlin’s home county. They agreed to introduce the colours subtly and include the names of the past Irish Ras winners.

More information on the build can be found on the FiftyOne website here.