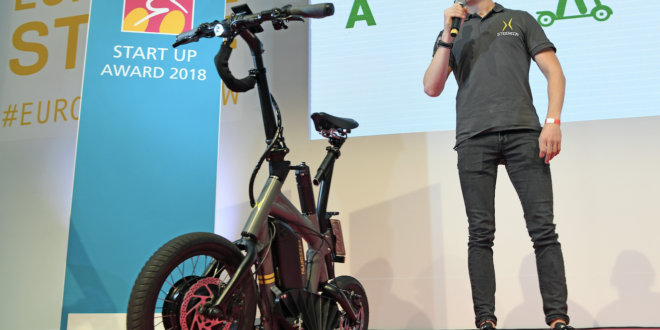 Eurobike to increase focus on micromobility

Eurobike is to increase focus on micromobility at the 2019 show.

“Micromobility, in the form of e-scooters, has enormous potential for the future. Together with public transport, it is another real alternative to the car. It is ideal for the last mile of the subway or the commuter train, or for the distance from the bus stop to the house or to work. As such, we are paving the way for future mobility and simultaneously ensuring safety on our roads,” said Andreas Scheuer, federal minister of transport and digital infrastructure.

Stefan Reisinger, head of Eurobike and responsible for bike, micromobility and outdoor at Messe Friedrichshafen said: “Around 60% of all car journeys are under 8km. This is where bikes, e-bikes and increasingly small electric vehicles represent an alternative which is not only more sustainable but also a faster way of reaching a destination. Under the micromobility heading, mobility solutions are becoming increasingly connected and seamless. In the digital age, city dwellers will use just one single smartphone app and decide according to the situation, the weather and their requirements, whether to use an e-scooter, a bike-sharing scheme, public transport or car-sharing.

“Urban mobility in the future will mean that people will no longer define themselves as cyclists, drivers, or public transport users, but instead decide spontaneously, according to the situation, which form of transport best fits their requirements – or maybe even just which form offers them the most enjoyment. This development will also be reflected more clearly in the future at Eurobike, as the leading international trade show for bikes and all bike-related matters. Moreover, innovations in the traditional bike and e-bike sectors are increasingly influenced by digital developments.”

Eurobike at Lake Constance originally started back in 1991 as a meeting point for the young mountain bike industry. Now in recent years, bike-related themes have gained greater prominence. In particular, Hall A1 has increasingly established itself as the focal point for new forms of mobility. By 2018, exhibitors were organised into the theme areas: digital solutions, e-bike components and the dynamic cargo bike sector.

“For 2019, we have numerous new exhibitors for this special area from the small electric vehicle sector as well as players from the automotive industry and platform providers. Our decision last year to bring mobility themes together at a central location is making waves beyond the traditional boundaries of the bike industry,” said Eurobike project manager Dirk Heidrich.

This year’s Eurobike takes place from 4th to 7th September 2019 on the Messe Friedrichshafen showgrounds. The new media event Urban Mobility Media Days by Eurobike will première from 10th to 11th July in Frankfurt am Main, where major mobility brands will be giving the media a first look at new developments for 2020. Eurobike has also launched a new trade show in Thailand. ‘Aseanbike powered by Eurobike’ will take place in Bangkok from 3rd to 5th October 2019.

“Bike retailers, distributors, manufacturers and other market players want to understand what the future holds for the market. Anyone who wants to know what will be the themes shaping the agenda beyond their immediate business environment, is in the right place at Eurobike,” said Reisinger.