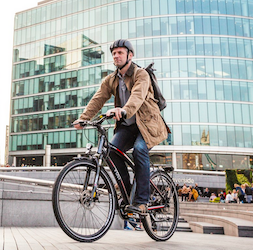 Following the recent news that the UK’s Office for Low Emission Vehicles is to offer grants for the purchase electric cars, vans, and motorbikes, but will not offer similar grants to would-be purchasers of electric cycles and cargobikes, BikeBiz reached out to a group of e-bike specialists to gain their opinions on the controversial move.

To read the original article by Carlton Reid, click here.

“A few years back I was at an APPCG meeting where the OLEV subsidies were being discussed and it was stated that not all of the money set aside for this had been taken up by electric car buyers, in fact there was a considerable pot left. I asked if this could be perhaps used in support of electric bike buyers. Unfortunately the official stance was that they couldn’t be sure that the grant would be getting people out of cars and onto an electric bike. It could be going to someone who was already riding a conventional cycle and therefore would not be improving emissions, but, would rather be a retrograde step. It appears that their thought process has not moved on, despite data from other countries showing that it can work. I think that not allowing a grant towards pedelecs is somewhat short sighted. For the most part people who are already out there on bicycles are going to continue to do that. Unless they are extending their journey and then this could keep them pedalling. What a grant could do is to encourage people who would not otherwise consider cycling. The Cycle to Work Scheme only goes so far to promote e-bikes. Most good quality electric bikes fall outside the upper limit and whilst I understand that there are proposals to change that, at the moment we are still waiting to hear if it will happen. I believe that a grant would make most people think seriously about a change in habit, to make riding a pedelec part of their everyday commute.” – Sue Coulson , Batribike

“I agree with Kit Mulhouse MP on this point. Kit rides a Wisper 905Torque e-bike to and from Parliament from his house in North London on a daily basis, he completely understands why we need alternative forms of transport and has put his money where is mouth is. In a response to a question posed to him after Carlton Reid’s editorial, Mulhouse said ‘I think you will find that e-bikes are eligible for the cycle to work scheme, and hence already attract proportionately much more significant subsidies than electric cars.’ Let the Government concentrate on building better and safer cycle routes, when we have a network even half way resembling that of Holland, Denmark etc. we will no doubt see an even bigger uptake of e-bikes in the UK.” – David Miall, Wisper Electric Bikes

“We’re very disappointed the Government has not yet seen fit to provide grants for the private or commercial purchase of e-bikes. Electric units are being bought daily by businesses and consumers as direct alternatives to less environmentally friendly modes of transport. We have seen numerous examples of this and the trend continues to grow. A perfect example – but only one of many – is the delivery market where e-bikes are being strategically chosen as an environmentally friendly alternative to motorcycles or cars. It seems that OLEV has not recognised the reality and importance of e-bikes being purchased in preference to more polluting vehicles. It has left the responsibility to invest in this environmentally friendly form of transport 100 per cent with the buyer. There should definitely be similar subsidies available.” – James Metcalfe, Volt Bikes

“E-bikes give many people an opportunity to cycle again that would not be available to them if only conventional bicycles were an option. The physical and mental health benefits of cycling are well known, it’s a shame that the grant scheme is not available to those for which an e-bike would be their only way of cycling. I’m sure the better health derived would cause a greater saving to the NHS than it would be a cost to carry out the incentive. Even if it was a means tested grant it would be better than nothing.” – Wazz Mughall, PowaCycle

“The OLEV grant scheme is a short-sighted and poorly thought out concept. The response of ‘There are no diesel powered cycles to incentivise people away from’ is as foolish as the myopic focus on electric vehicles. It seems almost immoral that taxpayer money is being used to subsidise the wealthy to buy expensive e-cars. The Green Commute Initiative has no £1,000 limit so it can include e-bikes and we’re seeing strong growth with some major employers signing up to it with their employees benefitting from up to 42 per cent savings. We focus on commuters and not cyclists and 80 per cent of what we do is e-bikes! However only PAYE employees can benefit from it and that means other sectors of commuters are excluded. Many commuters would benefit from an e-bike; these are often the people who will be left with no alternative to an older, cheaper more polluting car. The £4,500 subsidy on an e-car that will spend most of its life with a single occupant could subsidise five e-bikes and make them affordable for the self- employed or unemployed, low waged etc and this would be a much fairer distribution of tax payer’s funds.” ­– Rob Howes, Green Commute Initiative

Share
Previous Almost half of Raleigh owner’s €1bn turnover is now thanks to e-bikes
Next Do you have a policy on riding bikes in store?