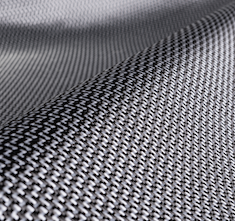 The new form of carbon was created to significantly improve impact resistance and vibration dampening, whilst reducing material weight on sporting products such as bike frames and hockey sticks.

“The popularity of pure carbon is easy to explain; it’s strong, stiff, lightweight and easy to mould, but it’s not so good at handling impact,” notes Roel Marissen, DSM Dyneema scientist and part-time professor at Delft University of Technology.

“Carbon also splinters when it breaks, which can cause injuries. By combining carbon with Dyneema, impact energy absorption can be increased by up to 100 per cent, whilst removing the risk of splintering. Dyneema Carbon hybrid composites are also lighter, less brittle and more vibration dampening than pure carbon composites.”

A high-performance prototype bicycle designed from Dyneema Carbon was presented to the public at the Dusseldorf K Trade Fair in late October; it featured a Dyneema carbon frame and spokes made from Dyneema braid. The bike was created as a preliminary prototype, but the brand is currently working with several other companies on furthering the development of the technology, and expects to have the first commercially available bikes on the market by 2018.

The material was also used in a project to create an aerodynamic seat for world champion cyclist Laura de Vaan, who recently won two medals at the 2016 Rio Paralympics. She commented: “I remember when I first used the bike for the time trials in Rio, it felt very solid on the road. I pointed it and it went in that direction. I knew it was impossible to break.”