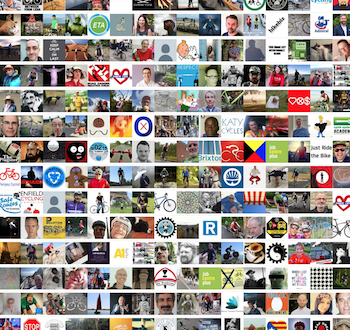 A data and systems manager has mapped the social-media reach of the calls to boycott Halfords. Howard Gees has placed a number of #boycotthalfords charts and graphs on Benchheaven.co.uk. The hashtag started trending soon after BikeBiz revealed that Halfords had issued a report which, among other things, said there was a "convincing" argument for cyclists to carry number plates. An accompanying press release was later used by The Sun and the Evening Standard to call for number-plate compulsion for cyclists, with the newspapers stating that the call originated from Halfords.

Motoring and cycling groups have condemned Halfords’ "Sharing the Road Report" but the retailer’s social-media team have so far blanked the barrage of messages to "boycott Halfords." The retailer’s Twitter team is studiously ignoring all of the number-plates-for-cyclists messages, but they are replying to other messages.

Gees said he felt sorry for the Twitter team because their workload – i.e. reading the barrage of tweets and sifting out only the positive – had been increased by 1700 percent.

The data visualisation charts include a "rogue’s gallery" of the Twitter users to have either included the #boycotthalfords hashtag directly in their tweets, or to have tweeted on the subject more generally.

The calls to boycott Halfords are also spilling over into other parts of the web, including Reddit and comments on sites such as Road.cc.

BikeBiz has requested comments for this story from PR executives at Halfords but emails, calls and text messages are not being returned.

Halfords has been here before. In 2003, the company produced a TV ad featuring chimps riding around a Halfords store, with the strapline "because you pay peanuts, we give you monkeys".

The Captive Animals’ Protection Society complained to advertising watchdogs and started a petition encouraging people to boycott the retailer. At the time, Campaign magazine said protests were planed outside a number of stores, using the slogan "On your bike, Halfords".

Halfords said it would continue to run the advert, but after a month of protests the retailer backed down, promising to never again to use live chimpanzees in its advertising.

The Guardian said at the time that Halfords had "suffered considerable adverse publicity over the ads."