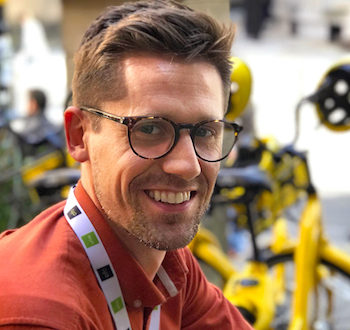 While some bike shops may fear that the arrival of dockless bike share in their town or city will harm sales of new bikes Ofo’s Adam Rose believes the opposite will be the case. And not only should bike shops not fear the dockless operators they should work with them.

Rose is a bike retail veteran and is now Ofo’s operations manager. Ofo is one of the big two Chinese dockless operators (with the other one being Mobike.)

"We’re working directly with local shops and workshops to help us build our fleets and deal with servicing," he told BikeBiz.

"As a previous independent shop owner, I can approach potential cycle industry partners with confidence, knowing that dockless bike sharing, when done right, is nothing but good news."

Rose started in the industry in 1997, creating Trialsin, an online cycle store. He moved into bricks and mortar retail in 2006, founding 360 Cycles, and latterly was the owner of Sheffield’s The Bike Tree, which closed in 2014.

Rose see the dockless sector from a bike shop owner’s point of view, giving him a poacher-turned-gamekeeper perspective

"Although it’s an innovative sector with elements of exciting new technology, every day since coming on board at Ofo I’ve still engaged with bike shop owners, managers and staff," he said.

"I can say that unequivocally the response of these professionals – from small and large businesses – when told that Ofo is coming to their city, is positive. They know that we’ll bring them work but also do good things to get more people cycling in that area."

Gareth Pentz, a partner at Reg Taylor Cycles in Oxford, agrees with that.

"Being in partnership with Ofo brings us a steady stream of business that’s keeping our workshop nice and busy," he told BikeBiz.

"We’re servicing between six and eight new bikes a day prior to them being released on the streets and we’re also repairing around one of the existing fleet each day too. It’s a good level that lets us still focus on our core customer base of locals and students.

"Ofo’s bikes are well built, and use traditional parts so there’s nothing unfamiliar, although they do use special fasteners for security reasons to prevent parts going missing.

"For us as a business dockless is a positive thing, and it’s nice to see an international business working with local partners and doing something positive to promote cycling."

"In a fast-growing sector it is crucial that operators work alongside the local community, and give residents the confidence that the highest industry standards will be upheld at all times.

“We are proud to be leading the way – partnering with local bike shops, hiring local marshals on the Living Wage, and working with local authorities to ensure our service seamlessly integrates with existing transport infrastructure.”