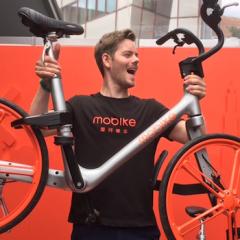 Data mining is why billions are being pumped into dockless bikes

Dockless bike-share schemes are attracting billions in cash injections not because of mobility but because the bikes are used by smartphone-wielding millennials. That’s one of the conclusions in a market report on the relatively new sector. "What attracts investors is the integration of rental services with the Internet or mobile Internet, such as GPS and mobile payment," states the report, blandly.

Apple invested billions of dollars on iTunes not just to make money from selling music but also to capture credit-card details. And now that Apple Pay – and its Android equivalents – have become commonplace Google and Apple have become more than just computer companies they are now major financial-transaction players. Similarly, Uber is worth billions because it has become an essential app on peoples’ smartphones and it too only works when linked to a credit card. Some transport-share apps track users for a few minutes either side of their journeys, and this will be information that could one day be monetised, investors are banking on.

If investors aren’t interested in the bikes in dockless bike share systems and they only want to mine the data it’s possible that tech companies will be looking for a quick return on the investment and will possibly go off to feast on another data-rich sector some time soon, leaving an awful lot of share bikes to rot by the roadside.

If so the latest report from Research and Markets will date quickly and won’t be worth the 1764Euro asking price. Research Report on China Bicycle Sharing Industry, 2017-2021 is a 50-page report. It stresses that the sector faces stiff challenges:

"While bringing convenience for residents, the industry is faced with a number of problems. Due to the non-docking nature of bicycle sharing, many users park bike wherever they want — even on motor lanes or pedestrian lanes. In many places, traffic police have detained sharing bicycles because of illegal parking. In addition, these bikes are also being vandalized and stolen."

Nevertheless, the report estimates that by the end of 2016, the supply of sharing bicycles had exceeded 3 million and is currently increasing by one million per month. There has been 18 million bicycle sharing users by the end of 2016 and will increase by 200,000 per month in the rest of 2017.

According to Shane Connaughton, dockless bike sharing will shake up the cycle industry, transform urban transport and, ultimately, reshape cities. The bike industry veteran is the CEO of Full Speed Bikes of Dublin, and you can read more about his thoughts on this earlier BikeBiz story.