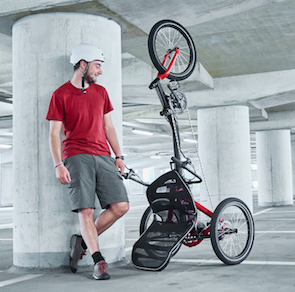 Ruhr, Germany-based Hase Bikes has announced the release of a new trike called the Trigo.

The trike is specifically designed for ease of use; design features such as a low-bending front boom to make mounting and dismounting easier, a higher – up to 26 inches ­– seat and pedals which are are positioned below the level of the seat instead of far out in front like a traditional recumbent, make the Trigo suited to previously upright riders.

The trike fits riders from 4’7” to 6’7” in height and can be simply adjusted to recline or raise seat height without the need for tools. The under-seat steering unit can also be quickly adjusted to ensure that the rider’s arms, wrists, and hands will remain in a natural, relaxed position.

In addition to the original model, the option of retrofitting a powerful mid-motor is available by replacing the bottom bracket with a Shimano Steps motor and battery system.

“We’ve adapted the Steps for use with our trikes because it’s simply the best system on the market,” explained trike developer and company founder Marec Hase. “No other system offers such a harmonious connection between rider and machine!”

The bike will retail for €1,995 in Germany, with UK pricing yet to be announced.