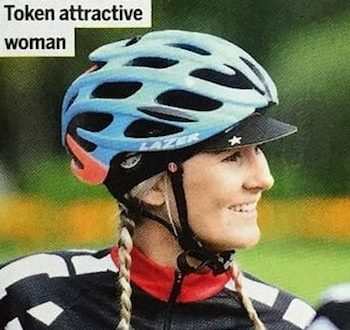 Club rider Hannah Noel took to Facebook to complain about a Cycling Weekly caption which said she was a "token attractive woman". Magazine editor Simon Richardson issued an apology on Twitter saying the sexist caption beside the Hinckley Cycling Race Club member was "not a reflection of the culture in the CW office." (Cycling Weekly employs women journalists.)

Noel said: "I made it into Cycling Weekly, it seems not for my ability as a female cyclist but as a ‘token attractive woman’ – I’m absolutely gutted and disappointed in the magazine."

Richardson blamed the rogue caption on a "member of the sub-editing team [who] decided to write an idiotic caption on a photo of one of the female members of the club."

He added: "The caption is neither funny nor representative of the way we feel or approach our work. Sadly in the rush to get the magazine finished it was missed by other members of the team and eventually sent to print."

Apologising, Richardson said that the "appalling lack of judgement" by the caption writer was "not a reflection of the culture in the CW office."