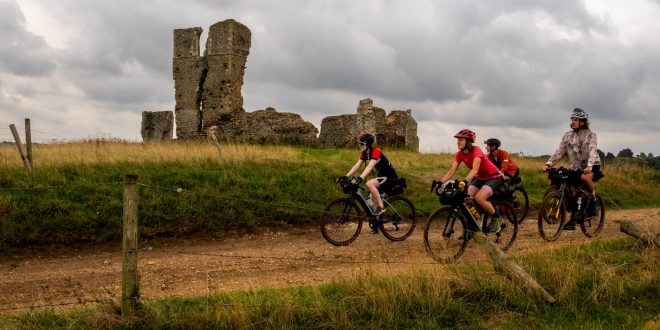 Called the Rebellion Way, it is a 232-mile (373km) route beginning and ending in Norwich. It’s designed to be ridden over four to six days in one go but can be split in half at King’s Lynn with onward transport options.

The route, which was funded through the European Regional Development Fund’s Experience project, passes through Diss, Thetford, Castle Acre, King’s Lynn, Hunstanton and Sheringham. Using a varied mix of country lanes, bridleways, byways, cycle paths and forest tracks, Cycling UK said it should be suitable for anyone with reasonable fitness on the vast majority of bikes.

The charity has designed the route as an entry point for people interested in multi-day bikepacking trips, but said experienced bikepackers will also be ‘pleasantly surprised’ by the variety and challenges the route presents.

Claire Frecknall, ambassador for Mason Cycles who rode the Rebellion Way in early September, said: “The Rebellion Way is a great ‘all ability’ route. Quiet lanes, beautiful forests and big skies, a proper adventure but without masses of elevation. I’d definitely recommend it to anyone looking to take their first steps into multi-day trips.”

Cycling UK is working with the not-for-profit Community Interest Company Experience Community to improve the accessibility of the Rebellion Way. They are currently devising a rideable route for people using adaptive cycles, such as handcycles or tricycles, which they aim to improve over the coming years.

Sophie Gordon, Cycling UK’s campaigns officer behind the creation of the Rebellion Way, said: “Norfolk has amazing local history, beautiful countryside and vibrant culture, which makes it the perfect place for visiting cyclists. With the Rebellion Way, Cycling UK has created another incentive for visitors and residents alike to discover an unseen side of the county.

“Our work in Norfolk doesn’t just stop with the Rebellion Way – as part of the Experience project, we’re also keen to work with hospitality businesses around the county, providing them with the advice and resources to welcome cycling customers with our Cycle Friendly Places initiative.”

As part of its role in the European Regional Development Fund’s Experience project which is operating in Cornwall, Kent and Norfolk as well as three other regions in France, the charity has spent considerable time creating the Rebellion Way. During its development, the charity has worked with local stakeholders to ensure the route shows off the best of Norfolk.

Cycle tourism spending from cyclists in the UK generates £520 million per year. There are 1.23 million overnight trips each year, benefiting small businesses in particular, and these contribute £433 million to the economy. A survey of riders of King Alfred’s Way, a route starting in Winchester that Cycling UK launched in 2020, showed that on average cyclists spent £83.60 per day on food and accommodation.

In preparation for the expected increase in cycling, particularly out of season, the charity is working with the hospitality and accommodation sectors in Norfolk. Cycling UK is providing businesses with free equipment bundles worth up to £400 and advice as part of its Cycle Friendly Places initiative to help encourage cyclists to visit local businesses.

The Rebellion Way is the sixth long-distance cycling route Cycling UK has launched since its riders’ route for the North Downs Way was unveiled in 2018.

Previous Tell us your thoughts: What do you make of British Cycling’s partnership with Shell?
Next C+A Global acquires Saris at bankruptcy auction