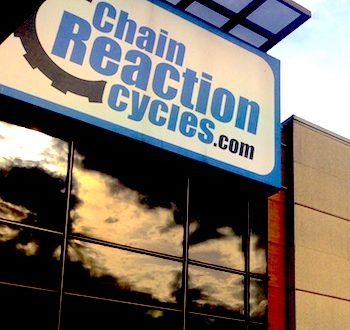 Directors of Northern Ireland’s Chain Reaction Cycles turned detective after discovering £100,000-worth of stolen bike parts were being sold on eBay. Brothers Brian and Alan Bowen have been jailed for their part in the scam – they sold the stolen goods via four eBay accounts.

Execs at Chain Reaction Cycles realised a great deal of stock was missing but they swung into action when they found that Carrickfergus-based eBay resellers had the same stock. The execs bought some of the suspiciously similar stock and when they found that the SKU codes matched with the missing goods they informed the police. Alan Bowen’s fingerprints were found on the bubble wrap of one of the packages, reports the Belfast Telegraph.

Detectives discovered that £88,645 had been deposited via PayPal into the Halifax bank account of Brian Bowen’s mother Valerie.

Brian was jailed for six months after he admitted selling more than £88,000 worth of bike parts online over a six-month period from October 2012. His younger brother Alan was given an eight-month prison sentence, suspended for two years, for selling almost £14,000 of the stolen goods over a four-month period up to August 2013.

Defence counsel had argued that the brothers had unwittingly bought the stolen goods at a car-boot sale but, passing sentence, Judge McFarland told the brothers: "I am satisfied there is sufficient proximity between you and the sale of these stolen goods.

"I just don’t accept that these items were randomly purchased at a car boot sale. I don’t know the exact relationship between you and the person who stole the items but it is clear it was a mutually beneficial relationship."

Share
Previous It’s #SmallBizSatUK – get into your local bike shop and buy stuff!
Next Forget nanotubes the next big bike thing could be nanofabrics