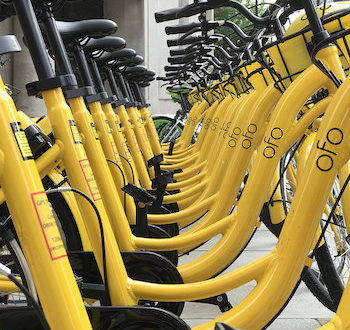 Global urban battles between the new wave of Chinese "dockless" bike share companies could become a little less fractious, if, that is, two of the biggest start-ups agree to merge.

The three-year old bike-share boom is so bouyant in China it is reducing car use in cities and even leading to forecasts that less fossil fuel will be burned in the future. And all because of the brightly-coloured bicycles now filling a great many Chinese cities. The release-by-app GPS-trackable modem-equipped bikes are cheap and simple to use, attracting newbies to cycling. Mobike and Ofo are the two biggest start-ups in the sector, and they are burning through investors’ cash in order to become the "Amazon" of bike-share schemes.

Bloomberg is reporting that Investors in both companies – which would have a combined value of $4bn – have been holding pre-merger talks.

The companies are separately backed by China’s two biggest e-commerce giants – Alibaba and Tencent. Tech companies like bike share companies not just because of mobility but also because of data-mining. The bikes are used by smartphone-wielding millennials. That’s one of the conclusions in a market report on the relatively new sector. "What attracts investors is the integration of rental services with the Internet or mobile Internet, such as GPS and mobile payment," stated the report, blandly.

Mobike said that it is not contemplating a merger.

“Mobike is the clear leader in the global bikesharing industry, supporting 30 million rides in 180 cities around the world every single day,” the company said. “We are fully focused on extending our global success.”

Ofo has said it plans to have 20 million bikes in 20 countries by the end of the year.

The bike-sharing boom has boosted demand for bicycles from companies such as Shanghai Phoenix Enterprise and Zhonglu of of China and Giant of Taiwan.

Share
Previous Chater-Lea – founded in 1890, dormant since 1987 – returns
Next Cycle Surgery store at Olympic velodrome is one of those to close