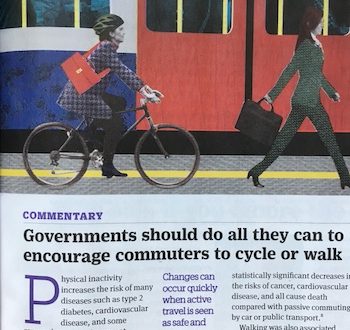 Yesterday, like much of the media, BikeBiz reported on the stunning health gains found by a massive new study on active commuting. Cycling to work was found to lower the risk of dying early by a staggering 40 percent. If a pill were developed that provided those sort of extra years of life it would quickly become the world’s most popular drug.

The study was published online in the British Medical Journal. Today we got our hands on the print edition. This has a cover story on study, and there’s also a strong editorial next to the piece. This was written by a professor of epidemiology and public health and is headlined: "Governments should do all they can to encourage commuters to cycle or walk."

The new study added yet more grist to the mill, he said.

"Among more than 250 000 adults in paid employment, [the new study] found that active commuting by bicycle was associated with a substantial and statistically significant decrease in the risk of all cause death … and death from cardiovascular disease compared with passive commuting by car or public transport."

In short, said the professor, "cycling to work could save a substantial number of lives."

Today, the government has released its long-awaited Cycling and Walking Investment Strategy, but the UK has a lot of catching up to do.

"The UK has neglected to build infrastructure to promote cycling for decades and the potential for improvements to increase cycling and the safety of cycling is huge," writes Andersen, a professor at the multi-campus Western Norway University of Applied Sciences.

"Cities such as Copenhagen have prioritised cycling by building bike lanes; tunnels for bikes, so cyclists do not need to pass heavy traffic; and bridges over the harbour to shorten travel time for pedestrians and cyclists. Today, no car or bus can travel faster than a bike through Copenhagen."

He added: "It will take decades to change commuter culture in the UK, but it is possible, and changes in commuter behaviour can occur quickly when active travel is seen as both safe and convenient."

The findings from the new study, said the professor, were a "clear call for political action on active commuting, which has the potential to improve public health by preventing common (and costly) non-communicable diseases."

He concluded: "A shift from car to more active modes of travel will also decrease traffic in congested city centres and help reduce air pollution, with further benefits for health."

Share
Previous Gocycle unveils GocycleConnect V5 app update
Next Is this the best bicycling beer ad in the world? Probably not