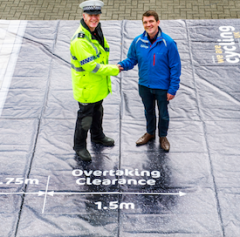 Cycling UK gave special recognition for the work of West Midlands Police and their Operation Close Pass over the weekend, at its annual Big Bike Celebration in Birmingham.

Operation Close Pass, an education and enforcement campaign targeting drivers who overtake cyclists too closely, saw the police force pulling over almost 200 offenders over the course of a year. Most of those pulled over were given on-the-spot educational input on how to overtake safely with 13 drivers prosecuted and around 350 fined. The result of the operation has seen a 20 per cent reduction in casualties among vulnerable road users over the course of the year.

Boardman said: “It’s great to see a room full of so many people directly on the ground enabling people to enjoy bikes. Inspirational.”

Cycling UK’s chief executive Paul Tuohy added: “It’s hard to think of two officers who have done more to help raise awareness on how to drive safely around people cycling, or who have done it with such passion. Steve and Mark identified the problem of close passing on their patch and came up with a simple and effective operation which reduced reported close passes by half overnight.”

Share
Previous 60 per cent of sports volunteers are male, says new study
Next The Cycle Show numbers revealed, along with 2018 info