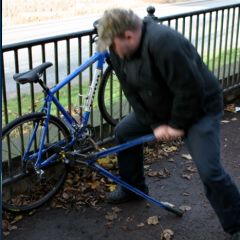 Bike theft drops by 25% – is that good or bad for the trade?

According to the most recent Crime Survey statistics published by the Office for National Statistics, there was a significant fall of 23 per cent in bicycle thefts in the year to September 2016.

Now, for those who are now no longer suffering the pain and hassle of having their bicycles stolen this is good news, but is there another side to the stats?

Could it be that cycle security products are getting better and thieves are being thwarted, or are bikes falling out of favour as items worth stealing? In other words, might the drop in bike thefts mirror a drop in demand for bikes in general? The bike trade does not have reliable sales stats, so it’s hard to pin down exactly how deflated the market is right now but, anecdotally, sales are down, and by at least ten percent. The latest bike theft figures – released in January – may reflect an even deeper drop in retail demand for bikes.

Here are the number of bicycle thefts recorded by the Crime Survey for England and Wales for each of the last five years:

Some regions have seen greater reductions in theft than others, while others have seen rises – Merseyside, for instance, has seen bike theft rise by 2.96 percent over the last five years. In Devon and Cornwall bike theft dropped by a reported 46.92 percent last year.

John Moss of Stolen-bike.co.uk has said:

"With the news that bike theft has now dropped to its lowest levels in ten years the trade can hopefully look forward to an uptick in those staying in the saddle – 25 percent of bike-theft victims give up cycling."

He added that "it’s really important that police forces and the wider cycling community continue the efforts that have led to this decrease, whether it’s making bike unattractive to thieves through marking and securing bikes properly or helping get bikes recovered and reducing the demand for stolen bikes."

The top five bicycle theft hotspots in the UK are said to be: