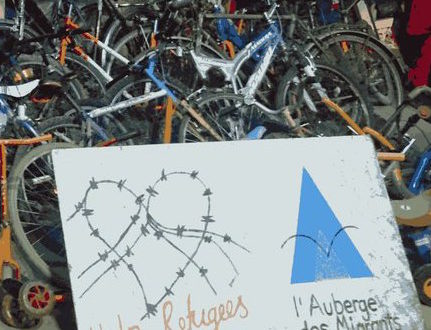 The charity Help for Refugees has put out a call for bike mechanics, bike parts and crowdfunding. The charity has forty donated bikes that need to be fettled at their Calais warehouse:

"We have approximately forty bikes in need of repair and a handful of kids bikes. Currently they are broken and taking up much needed space in our warehouse which we would love to use for goods such as tents and bedding to be sent out to meet immediate demand.

"Once fixed the bikes will be used in the refugee community as appropriate, focusing on many who have been resettled in a university scheme in Lille."

She added that they will also be used to help long term volunteers who live in Calais "and are the pillars that keep this operation working. The majority of us live in static caravans five miles from the warehouse; bikes are great for independent transport and thinking space before and after long days helping out."

Pedro’s EU is donating cleaning products and lubes through Silverfish UK; Fibrax UK has supplied enough brake and gear cables and outers to do all forty bikes; and other firms are also likely to support the project.

Volunteer Mike Stead – @tweetymike – said: "We need to get useable bikes for the volunteer workers to use and we want to fit racks/panniers/lights to as many bikes as possible. Evan’s Cycles in Waterloo, London are collecting donations of mudguards, AA- and AAA-powered LED lights, rear racks and panniers up until noon this Friday, so any London folk with kit they don’t need, it would be very much appreciated."

There’s also a "wrenches for refugees" fund-raiser. The funds will pay for the travel expenses of three mechanics – they leave on Friday afternoon.