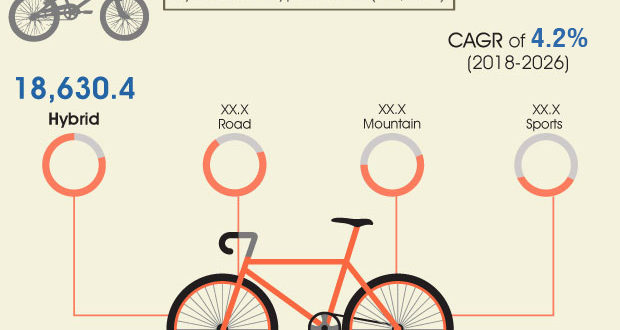 With a 4.2 per cent compound annual growth rate, the worldwide bike market is predicted to reach revenue close to $80 billion over 2018-2026, persistence market research reports.

Key components predicted to be behind the interest in cycling include increasing traffic congestion and advancing fuel costs.

Increasing well-being concerns amongst consumers, the adoption of green transport and the number of commuters taking up cycling as a sustainable option to travel will further add to the expansion of the world market in the next eight years.

Expanding government support for bikes and the fast advancement of cycling infrastructure in emerged and emerging economies will also allegedly push up sales.

There is also a reported increase in the use of bikes in recreational exercises and trekking, and combined with an increasing number of cycling events these will particularly boost the demand for sports bikes.

In terms of the technology, hybrid bikes capture the most market revenue share, but they are expected to lose some to sports bikes due to the latter’s increasing acceptance rate in markets such as China, Europe and North America.

These three markets are predicted to hold more than 75 per cent of the total revenue share by the end of 2026.

Mountain bikes are also set to have a moderate gain in the coming years.

E-bikes remain above conventional bikes in both demand and supply terms, with China becoming the dominant hub and global leader in this area.

The market is also forecasted to gain a push with government initiatives for cycling promotion, the introduction of ultra-lightweight bikes, fast advancing infrastructure dedicated to cycling and increasing attractiveness of unisex bikes.