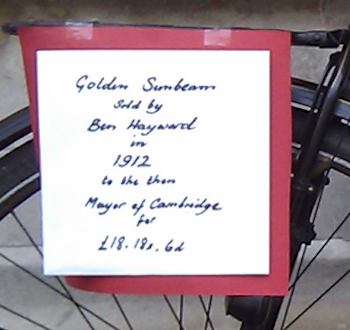 "Sad to announce that we will be closing at the end of January," wrote Rob Turner on Facebook, announcing that Ben Hayward Cycles – trading since 1912 – will close in January.

He added: "We have enjoyed being a part of the vibrant cycling scene in Cambridge for nearly 105 years. Much has changed in that time, cycling use has oscillated, trends come and gone … We have always tried to concentrate on service, offering the best advice, customisation, hopefully a friendly easy route to a bike that fitted your needs. But the High Street has changed, retailing has changed and despite our best efforts, we find ourselves fighting to survive let alone thrive in our saturated Cambridge/world marketplace."

Turner then thanked his customers, suppliers, landlord, and friends in the trade, "we’ve had fun and enjoyed the glory of the bicycle together."

Ben Hayward Cycles is in the fourth generation ownership of two Cambridge families. Turner opened a satellite branch at a garden centre in Horningsea in 2009, and relocated there fully in 2014, citing "reduction of parking bays on Trumpington Street, increased passage of coach trip visitors, the growing number of cycle shops and heavy internet competition."

BikeBiz will have an in-depth interview with Rob Turner in the next print edition of the magazine.