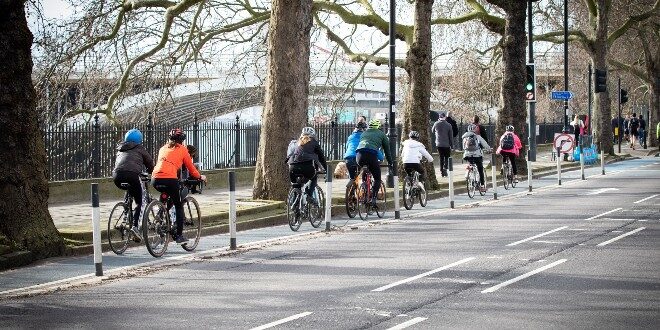 Construction work will begin on four major new cycling infrastructure projects across the capital this month, the Mayor of London Sadiq Khan and TfL have announced.

260 kilometres of high-quality cycle routes have been delivered since May 2016 and the need to create space on London’s roads for walking and cycling has become even more important since the COVID-19 pandemic began, with record numbers of Londoners walking and cycling to make essential journeys.

TfL data has regularly shown significant increases in cycling at weekends, with an increase of 240% over the weekend of 26th-28th February 2021 – the most recent weekend for which TfL has data for – compared to the same weekend in 2020. Recent TfL cycle count data shows the increased levels of cycling in both inner and outer London last autumn with a 7% increase in cycling in inner London and a 22% increase in outer London compared to the previous count in spring 2019. Walking and cycling accounted for nearly half of all journeys during the first lockdown between April and June last year, up from 29% before the pandemic.

– A protected two-way cycle lane on Mansell Street in Tower Hamlets and the City of London, which will help create a vital new link between two major protected routes in the area, Cycleways 2 and 3
– A cycle route along Tooley Street, which will extend the existing Cycleway 4 route from Tower Bridge Road to London Bridge, creating a high-quality cycle route between Rotherhithe and London Bridge for the first time
– Further trial upgrades to the CS7 route between Oval and Elephant and Castle. These will mean that people can cycle between Colliers Wood, Tooting, Balham, Clapham and central London via a largely protected route – or in improved bus lanes – for the first time
– Work to make cycling safer along the A23 between Streatham and Oval, including by widening bus lanes at stops to make it easier for people cycling to safely pass stationary buses, and creating separate traffic signals for cycling at key junctions

These new routes will build on the construction work already underway to make cycling safer and easier including significant upgrades the CS8 route between Wandsworth Town Centre and Chelsea Bridge, which will connect to further improvements to create a safer route between Wandsworth and Lambeth Bridge. Work is also in progress at Old Street, Cycleway 9 at Kew Bridge and Cycleway 4 on Creek Road in Greenwich. 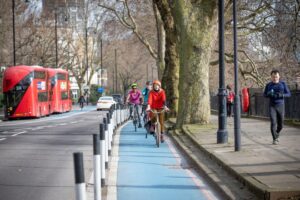 “I’m absolutely determined to build an even better London after the pandemic – a greener and healthier city in which it’s easier and safer to walk and cycle,” said Khan. “I’m delighted that construction work on four new cycle schemes is set to begin this month, adding to the record expansion in the network of routes across our city since May 2016.

“The huge number of Londoners who have taken up or rediscovered cycling over the past year – myself included – has been one of the few silver linings from the pandemic. By making it safer and more convenient for people to get to where they want to be, we will not only keep up this momentum but also enable a cleaner and greener recovery for our city.”

Alexandra Batey, TfL’s director of investment delivery planning, added: “Reducing car dependence and enabling more people to walk, cycle and use public transport is absolutely vital to improving road safety and our physical and mental health, as well as the health of our economy and the environment.

“That’s why we’ve worked closely with boroughs across London to deliver record growth in the capital’s cycling network over the past five years, including the vital work done to support Londoners since last March. Walking and cycling will be a vital part of both London’s immediate recovery and future prosperity and we’ll continue to engage closely with people across the capital as we deliver further schemes to reflect the changing situation.”