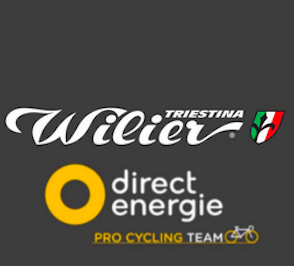 Wilier Triestina has reached a partnership agreement with the Team Direct Energie.

From January 1st, 2018, the Italian bike manufacturer will be the Official Bike Partner of the French squad and its development team Vendée U.

Both teams will be equipped with the flagship aero road bike Cento10AIR and the Twin Blade time trial frame.

CEO of Wilier TriestinaAndrea Gastaldello commented: ”We’re happy to team up with a successful pro cycling team like Direct Energie and we look forward to start to work with Jean René Bernaudeau’s group. Together we’re confident to return at Tour de France. A race where our brand is used to be protagonist. At the same time we look to strength our presence in France, a key market for Wilier Triestina where today we have around one-hundred official dealers and in 2016 we sold over 3.000 products. Numbers that we want increase thanks also to the collaboration with the Team Direct Energie”.

General manager of Team Direct EnergieJean René Bernaudeau added: ”We’re delighted to be back in the world of high-tech bikes with Wilier Triestina; the possibility to work together on the development of a new time-trial bike has been a key point for our choice. We hope to beat our record of victories thanks those, like Wilier Triestina, share our values!”