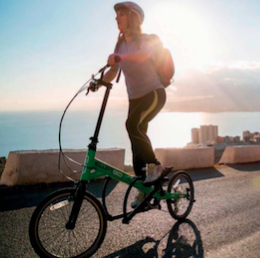 In an industry of such diversity, a product catering to those who are unable to use a traditional bicycle is nothing to sniff at. It’s a side of the market that in the last ten years has remained sorely underdeveloped, but a small collection of companies are now working to change the way that disabled people ride.

Alternatives to conventional bicycles aren’t a new notion in this industry, but for many, the issue came to the attention of the public when beloved cycling icon Sheldon Brown, due to health issues, became unable to use a traditional upright bicycle. Images of a cheerful Brown riding his Greenspeed GT3 recumbent tricycle made their ways from his blogs into all four corners of the internet, evidencing that physical ailments need not be a damning sentence for cyclists.

In the same vein, ElliptiGO sees the benefit of its unique elliptical bikes to those with mobility problems as just one of many reasons that customers are so enthusiastic about the units. Six years after founder Bryan Pate conceived the idea, ElliptiGO is going from strength to strength.

With a new product in the public eye, their annual profit margin is teetering on the 50 per cent mark. We caught up with sales manager Chuck Day to talk about the brand.

The concept for the bike was conceived in 2005. When ex-marine and Ironman triathlete Bryan Pate suffered an acute medical condition, he lost the ability to pursue his primary source of exercise – running. A vexed Pate turned to the fitness industry to find an alternative source of training, and was shocked to discover that nothing existed which came anywhere close to simulating running. “In his mid-thirties, Bryan had issues with his knee, due to a degenerative condition; he was doing a lot of training on an indoor elliptical and suddenly had the bright idea to bring it outside,” recalls Day.

Pate realised that the answer to his issue would involve a fusion of a running-like motion with the speed and health benefits of cycling. Knowing that the project would require a mechanical engineer, he turned to co-founder and friend Brent Teal. The two set about building the original design for what would become the first ElliptiGO bike, at the time known as Alfa, and in mid-2006, the first prototype materialised.

Both Pate and Teal were delighted to find that the new bike went above and beyond in exceeding their expectations. Pate, who until this point had found outdoor exercise tremendously problematic, rode the ElliptiGO for over 20 miles on the very day that its construction was completed.

“It’s massively useful for those with conditions that don’t allow them to ride a conventional bike,” Day explains. “There’s no seat, so if the user has prostate issues or back issues that make sitting uncomfortable, the bike puts them in a natural position. For a lot of people this is a necessity, not an accessory. This becomes their fitness tool.”

The bike went through various minor design changes, cycling from Alfa through to second model Charlie, and onto the new bike that is now on the market. Despite these tweaks, little has changed since the prototype took shape, says Day: “The product we’re selling today is essentially the same design as the original bike. We wanted to take the idea of an elliptical and make it mobile by putting it on wheels.” The ElliptiGO first went into production in 2010, and the company has continued to gain traction successfully year upon year. “We’re up 50 per cent over last year, and we’re growing fast at the moment, internationally too. We distribute completely independently all over Europe, East Asia and Australia.”

Despite the positive reaction from the community, the applications of the ElliptiGO have caught eyes far beyond the realms of disabled cycling. The model has also attracted the attention of the running world, presenting a far more endurance-heavy, and therefore shorter, training session for amateurs and professionals alike. “In the States’ running world, this is becoming the tool of choice,” Day tells us. “Professional running organisations like the Nike team and Division One college state running programmes are using the ElliptiGO to train athletes.”

Another unexpected reaction to the release of the ElliptiGO has been the use of the bikes in races and long-distance endurance rides. This user-generated subculture of riders sprung out of one of Pate and Teal’s first demonstrations of the bike. The duo rode over 129 miles over three mountain passes, including more than 15,000 feet of climbing roads, and successfully completed the race well within the time limits. They commented that the completion of the race, “The Death Ride”, was the validation the bike needed to be taken seriously, and that people have been completing similar rides ever since.

“A guy came to the States and rode 6000 miles on an ElliptiGO,” says Day. “It took him 90 days and he averaged well over 100 miles a day. Last year we had nine people complete the Paris-Brest-Paris race PBP); six of the nine people who attempted it made it all the way, and everyone gave it an amazing go."

So what does the future hold for the brand? In acknowledgement of the fact that the original model may be challenging for those with limited storage space, or who are short in stature, the Arc hit the shelves earlier this year. The small, lightweight model – the whole unit weighs just 37 pounds – is receiving positive reviews. “We wanted something that was nimble, more agile, and easy to control. It’s a completely different feel: the motion on the Arc is more compact and it’s perfect for those with short strides.” The new bike will no doubt keep the company busy over the next year, but beyond that? Day is staying tight-lipped. “I really can’t say too much, but there are some very interesting things in the works.”

Share
Previous Mike Burrows: the biography of the man and his bicycles
Next Big Bike Revival celebrates over 500 events in Scotland