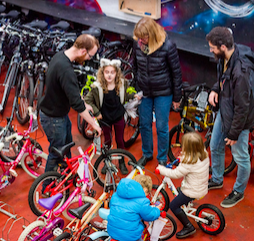 The Cycling UK initiative, which was started to encourage more people to cycle, has hosted over 500 events in Scotland.

After an introduction in mid-September, the award-winning programme developed by Cycling UK has been encouraging the use of bikes in Scotland by offering free mechanic sessions, bike safety checks, confidence building classes, led rides, route planning and more.

81 community groups, businesses and charities across the country are currently partnered with The Big Bike Revival, working with many local authorities in the process. Activities have taken place in areas such as Lerwick, Kirkcudbright, Stornoway and Aberdeen.

“The last six weeks of The Big Bike Revival have been amazing. We’ve seen thousands of people attend our events across the length and breadth of Scotland. We’ve been delighted at the positive feedback and comments from those who have dusted their bikes down and decided to get back in the saddle.

“We’ve worked with a wide range of people to encourage them to get riding, including people with disabilities, those that haven’t cycled for decades, families, members of BME communities and older people. The organisations involved have also seen great benefits from working on The Big Bike Revival, including reaching out to new people, fostering relationships locally and offering cycling activities for the first time. We’re looking forward to building on this success and momentum with community club provisions,” said Shona Morris, Big Bike Revival project manager.

Around two-thirds of journeys in Scotland under five kilometres are currently travelled by car. The Scottish government has publicly announced a plan to increase everyday cycling journeys by ten per cent, with a view to having this implemented by 2020.

Now the milestone has passed, The Big Bike Revival is aiming to support people through the next stage of the cycling calendar, with the winter months targeted as a time in which bike usage decreases. 50 cycling clubs will be developed and supported across Scotland to provide people with ongoing cycling opportunities and activities.

The newly-developed clubs will be supported by five Cycling UK development officers and will include family cycling, confidence and fitness, and all-ability cycling groups. Ride leader training, first-aid sessions and basic mechanic classes will be implemented to help clubs with sustainability.

Humza Yousaf, minister for transport and the islands, commented: “The Scottish Government is delighted to be funding this initiative and to be working with Cycling UK in helping to get old bikes back into use. With 35 per cent of the population having access to at least one bike, cycling should be a more visible activity, and hopefully The Big Bike Revival will make that happen.”

Share
Previous Who is ElliptiGO?
Next BikeBiz has moved to London