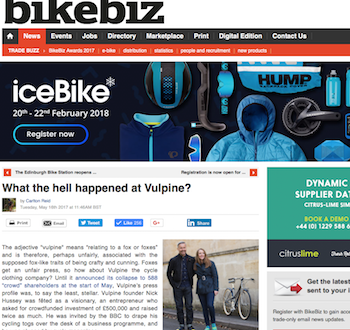 “What the hell happened at Vulpine?” was most-read story of 2017

In a bumper year for cycle industry news the most-read story of 2017 was "What the hell happened at Vulpine". Despite raising over £1m in crowd-funded investment the fêted cycle clothing brand collapsed in May. BikeBiz broke the original story, but it was the follow-up analysis which attracted the most attention.

Two Halfords stories also made it into the most read stories of the year, but the company probably wishes they didn’t.

Here are the other nine stories in the BikeBiz.com top ten for 2017:

4. "They’re just bits of plastic" – why cyclists buy fake Oakleys. This is a story from 2016, part of the much-read "Faking It" series.

7. When is a Pinarello not a Pinarello? When it is a Chinarello. This is also from the 20-article "Faking It" series from 2016.

Despite these strong news stories the most-read part of the site remains the perennially successful jobs board.

Happy New Year from all at BikeBiz – here’s to a prosperous 2018!