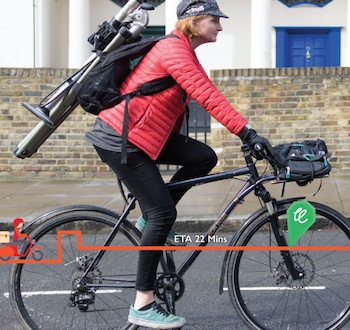 VonCrank of London plans to roll-out an AA-style bike-rescue service for cycle commuters in London, with emergency repairs carried out by bike couriers. Founder Cariern Clement-Pascall told BikeBiz he plans to launch the service by March next year.

Currently, VonCrank has 120 mechanics on its books, and 2,000 users, said Clement-Pascall, a former professional rugby player. (He played for London Broncos and London Skolars.)

Clement-Pascall created VonCrank to be a Deliveroo for bike mechanics. His firm takes a 20 percent cut from the jobs sent to mechanics via an app.

Before creating VonCrank he operated the Velo City Cycling mobile mechanic service which he ran in London between 2011 and 2014.

Most of the VonCrank mechanics are based in London, he said, but there are also two in Edinburgh, two in Birmingham and one in Bristol. He’s planning for more to join as he "scales" the service.

On his Linkedin profile he said: "I’m on a mission to completely upset the cycling industry and change the way we fix and service our bikes."

At the Innovations in Walking and Cycling Conference held in London on Tuesday, Clement-Pascall told delegates in a presentation that VonCrank mechanics offer a “premium service for less than what a bike shop would charge." One of his presentation slides said bike shop customers get a "spicy bill" for their bike servicing.

Most UK bike shops employ Cytech-qualified mechanics. Cytech is the internationally-recognised training and accreditation scheme for bicycle technicians. Clement-Pascall confirmed to BikeBiz that VonCrank does not require its self-employed mechanics to have any qualifications as the firm’s "onboarding" tests the skills of the prospective mechanic with picture- and video-quizzes.

A "commuter" service from VonCrank costs £60. "Some mechanics have made £500 in one day," said Clement-Pascall.

"I want cyclists to pay less for their servicing so it encourages them to cycle more – maybe get three services a year rather than just one," said Clement-Pascall.

"Yes, we’re taking work away from bike shops," he claimed, "but there’s some stuff that we won’t do and we’ll leave that to a bike shop. This cuts down on the amount of tools mechanics need to carry."

"We have two tiers of mechanics," said Clement-Pascall.

"Ones who can do just puncture repairs and basic servicing, carrying certain levels of tools and spare parts. Then we have ones who have a greater inventory and skills, usually learnt through us."

Before he launched the business Clement-Pascall estimated the size of the London bike repair market to be worth £87,500 per day. He based this on 200 bike shops servicing seven bikes a day and each job costing £62.50.

The courier-based service planned for roll-out in March will offer gig-economy fees to couriers to attend emergency repair jobs.

"If you have a puncture or snap your chain we can be with you in 15-minutes," envisaged Clement-Pascall. Full-on bike repairs won’t be offered, just "enough to get you moving," he said.

The VonCrank app is done in-house. Clement-Pascall has self-funded the start-up so far, as well as attracting one investor. "We now need to find a source of funding to help us scale," he told BikeBiz.