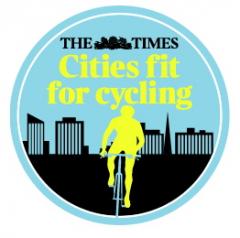 The Times now whimpers on cycling when before it thundered

Yesterday the front cover of The Times led with a false claim that the government was considering mandating cycle helmet use. Citing BikeBiz, transport minister Jesse Norman quickly stamped on the newspaper’s easily disproved claim, but that he had to do so shows how far The Times has fallen since 2012 when it started its “Cities fit for cycling” campaign. And, today, The Times again shows its timidity on cycling where before it lived up to its nickname, “The Thunderer”.

Transport correspondent Graeme Paton – the journalist responsible for yesterday’s false cover story – has a long piece in today’s paper headlined “Radar guns and speed warnings to slow down cyclists” in which he also inserted calls for compulsory cycle helmets from the Headway charity and Olympic rower James Cracknell.

Elsewhere in the newspaper the leading-article editorial calls for children “riding with their parents” to be “obliged to wear protective headgear and high-visibility vests.” It steers clear of recommending the same for adults – “Wearing helmets should be a matter of common sense, not law”, it says – but on the far more important issue of protecting cyclists from drivers, it’s weaker than it used to be. The editorial said cyclist safety would be improved with “dedicated, clearly marked lanes to prevent collisions with cars and lorries”. Does “clearly marked” mean kerbs or paint? The newspaper does not say.

It was all so different in 2012 when the newspaper, under then editor James Harding, championed urban cycling. Its "cyclesafe" campaign led with a number of strong leading-article editorials. One thundered: “The bike is the future and the task for British cities now be must be to adapt to the bike." The newspaper added that it was pushing for "nothing less than building a different kind of urban realm."

The campaign had been started following catastrophic injuries suffered by Times reporter Mary Bowers. In 2011 she had been knocked from her bicycle and crushed by a lorry as she cycled to work. "Shortly after her accident, this newspaper launched Cities Fit For Cycling, a campaign to make Britain a safer nation in which to ride,” explained her colleagues.

In February 2012, Prime Minister David Cameron told parliament that he welcomed the Times’ campaign: “If we want to encourage the growth in cycling we’ve seen in recent years, we need to get behind campaigns like this.”

The following year The Times paid £10,000 to fund the parliamentary Get Britain Cycling report, and an editorial endorsed the call for “changes to speed limits, better training for children and drivers, improved road junctions and more segregated cycle routes.”

(While the newspaper’s cyclesafe articles used to be free to access – they have now been placed behind the Murdoch paywall.)

Back in 2012 I said I welcomed the kick-off of the cyclesafe campaign, but I warned that it was possible that “the messages left after the campaign has finished will be negative ones: the result might not be improved junctions and Dutch-style separated cycle paths but mandatory use of substandard bike paths, a licensing fee for cyclists, helmet compulsion and other ‘safety measures’ that are easy and cheap for politicians to implement but actually do little to improve cycle safety.”

It’s sad to report, but it’s becoming clear that some of my fears were well founded.