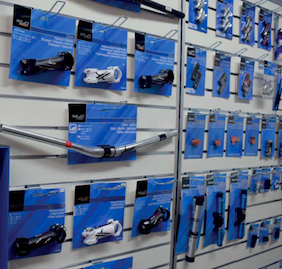 In early 2017 it was announced that Raleigh would be unveiling a series of modernised renovations to its Nottingham base of operations.

In addition to the vastly improved bicycle showroom, the quintessentially British brand-cum-distributor introduced a sleek new P&A centre packed with its ever- expanding selection of new products. The improvements marked an increased commitment by Raleigh to concentrate efforts not only on its history, but also on the emerging ranges of electric, folding, trail and hybrid bikes now in the distributor’s arsenal.

Whereas the quintessentially British selection of traditional upright Raleigh models – each sporting a matching pannier rack, chain guard and stamped with the instantly recognisable ‘R’ bike badge – still have their place in the range, the bikes now fight for position in a range that includes the likes of Diamondback, Haibike, Lapierre and Salsa.

The now-state-of-the-art centre not only sports a well- stocked bicycle showroom and a parts and accessories experience, but also includes updates to the production warehouse, a fully-fitted “bike café” and a vast velopark, where dealers and staff are welcomed to put any bike in the range through its paces. With so much to discuss, I travelled to Nottingham to meet the brand ambassadors behind many of the key Raleigh brands and talk about the various changes to both the complex and the range.

One of the most significant shifts in the Raleigh ethos is the increased investment in the fast-moving e-bike market in which acquisition Haibike plays an integral role. The brand, which was arguably one of the first to seriously invest in the latest e-bike technology and make the concept truly viable to the general public, has continued to remain a leading figure in e-bike progression. Positive working relationships with the likes of Bosch and Yamaha mean that the Haibike tends to be one of the first on the market to integrate the latest generation of motor technology into its models.

Whereas Haibike is geared almost exclusively toward the mountain biking sector, it’s Raleigh’s own selection of branded e-bikes that takes up the challenge of appealing to everyday e-bike users. Product manager Terry Blackwood tells us that the range is mainly divided into two key areas. These are the leisure range, which includes the classic Dutch-style upright bikes such as the Spirit – upon first viewing almost indistinguishable from historic Raleigh models due to the classic stepthrough frame and the concealment of the 400Wh battery in a matching pannier rack, and featuring a TransX F15 front wheel motor and a seven-speed Shimano Nexus hub – and the urban range, a faster selection of city-oriented bikes such as the Strada Electric, which is fitted with a Shimano E600 400Wh battery on the downtube and the E6000 STEPS system with Di2 electronic shifting.

So what does Blackwood think is the most integral key to marketing e-bikes? He told us in no uncertain terms: “Bike shops need to think about who their audience is when selling e-bikes in the Raleigh range. If these people aren’t buying a bike for sport, they’re buying it for leisure or to commute. In that case, they may not have ridden a bike for upwards of 15 years.

They need to think about how they’re selling – we’ve updated our marketing to really speak to those customers. Whereas we can discuss batteries and componentry, hardly any of that appears in our marketing. It’s all about what the bike is capable of and how far the user can go. That’s important, but the number one rule in selling e-bikes is – get them to test ride it!”

Raleigh’s commitment to distribution spans far beyond the company’s large investment in e-bikes; the white walls of the new experience centre currently display ranges from over 38 different brands from industry staples such as WD40 and Michelin, to more up-and-coming brands such as Ass Savers, whose colourful and versatile mudguards are available in a range of eye-catching designs and patterns, and OK Baby, whose Italian-made child seats are designed around a range of interchangeable padding.

Whereas a successful winter may have just ended for lighting specialist Moon, the brand is getting a head start on the competition by introducing the first samples from the AW17 range to Raleigh. For now, the brand’s range includes a host of diverse and long-lasting units, such as the Meteor Storm Pro, which contains two Cree LEDs capable of a 2000-lumen output in both spot and flood configurations. The light is designed to withstand the elements due to the insulating internal copper coating, which helps regulate temperatures.

Other popular items in the range include the Aerolite Cob Light, which is designed to sit on the end of a drop bar and provide increased visibility without taking precious bar space away from the user. Despite its compact casing, the light is packed with a high-output LED in the front, and a red-tinted COB LED in the rear to warn other road users of the rider’s presence.

Another acquisition that has experienced growth over the last 12 months is helmet and eyewear brand Uvex, whose range extends from a colourful selection of children’s protection such as the simple-yet-effective EPS Kid 2, all the way up to race quality units such as the Boss Race, which features 19 ventilation channels, a monomatic buckle and an adjustable fitting system.

The helmet, which is designed for use on both mountain and road bikes, weighs in at just 215 grams. Whereas the brand may be better known for its helmet selection, investment is also being put into its range of sunglasses, such as the Variotronic S model, which uses a laminate of liquid crystals with lectrochromatic activation through a photocell light sensor to automatically adjust its tint to surrounding light conditions in just 0.1 seconds.

As Raleigh has proved with its updated showrooms, presentation is an essential part of any offering. This is something that P&A brand XLC has explored at great length over the past year. Its solution is a completely flexible presentation board (sporting its signature blue colouring) which is capable of displaying anything from bells to pannier racks to toolkits side-by- side.

Once the dealer has selected the items they want to display, the board can be assembled to create a strong presence whilst using minimal floor space. As brand manager Duncan Mckenzie told us: “The XLC range is going down extremely well with dealers; there’s just so much diversity in the range and with the added bonus of the presentation board, you can turn a very good profit. In fact, some dealers have started calling it fast
blue wallpaper!”