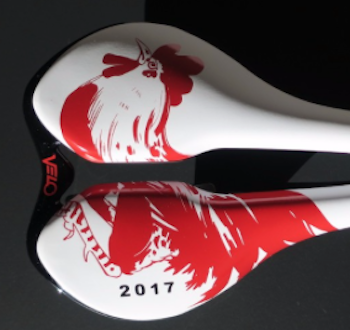 Velo Saddles of Taiwan is producing a limited edition model for the Chinese New Year, which starts on January 28th. Next year is the Year of the Rooster so Velo Saddles has taken its Angel saddle and incorporated a graphic of a rooster.

According to the Chinese zodiac tradition the rooster represents positivity, fidelity and punctuality. Stella Yu’s Velo Saddles was founded in 1979 and now makes 15 million saddles per year for itself, and for other companies.