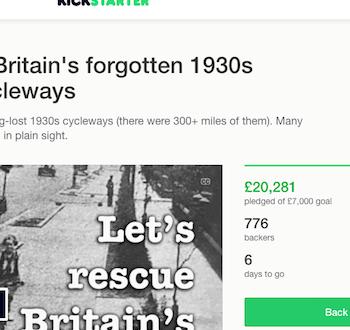 US company is first corporate backer of British cycleways campaign

The Kickstarter campaign to research and revive 300+ miles of 1930s-era British cycleways has achieved more than £20,000 in pledges. The original funding goal had been £7,000 but now 776 backers have so far pledged £20,281. Showers Pass of Portland, Oregon, has been revealed as the first corporate backer of the campaign, which was started by BikeBiz executive editor Carlton Reid.

The cycleways-reviving campaign has been a media success story – it has appeared on BBC.co.uk, and BBC Radio 4’s You and Yours and on huge US history sites such as Atlas Obscura.

Reid said: "It’s fantastic that an American company has seen the worth – and the PR potential – in backing this campaign. Cycleways get more people riding bicycles, and this project could revive hundreds of miles of these largely forgotten kerb-protected bits of infrastructure."

Corporate backers of the campaign get logos and name-checks on the reports that will be sent to backers and to local authorities across the UK. These reports will also be submitted to national agencies such as the Department for Transport and Highways England. Corporate backing of the campaign costs £505.

With six days left to run there’s still time for British bike companies to back the project, said Reid.

Showers Pass is the official apparel supplier to the International Mountain Bicycling Association. Company president Kyle Ranson is originally from the UK.