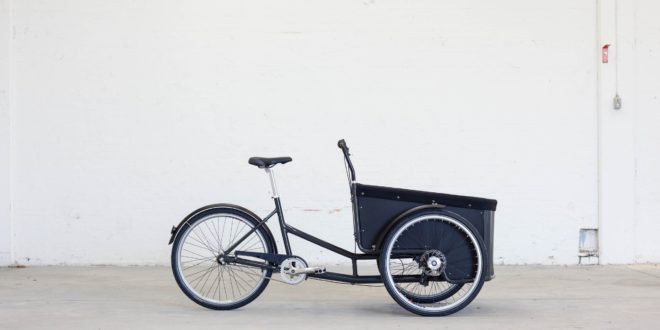 The Department for Transport has announced it is likely to soon start offering purchase grants for electric cargobikes. It’s probable that the subsidies will be delivered via the same "Plug In" grant schemes available for cars and vans offered by the DfT’s Office of Low Emission Vehicles. There are no firm details as yet, and there will first be a consultation period, said a DfT statement.

The cycle industry has long argued that it’s nonsensical that the e-cargobike does not benefit from a low-emission-vehicle purchase grant.

The grants will be probably be announced at the same time as the findings from the government’s cycling and walking safety review.

Electric cars currently get £4,500 buy-from-new sweeteners, and vans get up to £8,000. The government says it is spending £1.5 billion on ultra-low emission vehicles to 2021.

The Bicycle Association’s operations director Steve Garidis welcomed today’s announcement: “Wider use of e-cargo bikes, proven to be among the lowest emission electric vehicles on the market, would drastically improve air quality, reduce congestion, making our cities a nicer environment to reside in."

He added: "Countries which have introduced subsidies for e-cargo bikes and e-bikes – such as France and Germany – have seen dramatic increases in uptake.”

In 2014, the Bicycle Association raised the inequity of similar e-vehicle sweeteners, available since 2010, and the government promised to "consider" the funding disparity.

In February, transport minister Jesse Norman had said: "We do not plan at this stage to extend grant funding to e-bikes and e-cargo bikes."

However, last year, the minister told the Guardian that an e-bike subsidy could happen.

“We’ve done some work on [an e-bike grant] already," said Norman, "and I haven’t looked at the outcomes yet … [but] there’s a case in principle."

Back in 2013, BikeBiz pointed out that the government was happy to subsidise the purchase of low emission e-cars, but wasn’t offering the same support for non-polluting bicycles.

It’s important to note that the OLEV subsidy scheme is not like the long-running Cycle to Work Scheme. That’s a salary sacrifice, not a grant, and is not available to everybody. Anybody with cash can get an OLEV grant to buy an e-car, e-van or e-motorbike. The paperwork is handled by the motor dealer. The "plug in vehicle" grants are, in effect, free money, no strings attached.

Share
Previous CRC affiliate sales “fell off a cliff” last year and have not recovered, say clients
Next Motorists are only marginally quicker than cyclists, shows DfT modelling (and the cyclists had time added on for parking)