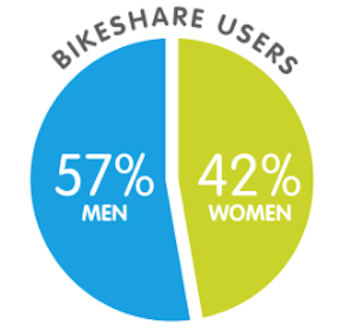 The representative body for UK bike-share scheme claims that bike-share is attracting more people to cycle. Bikeplus says that this includes more women getting on bikes, too.

A survey conducted by the charity found that a "significant number" of people have switched journeys from cars and taxis to bike-share bikes. This has a direct and positive impact on congestion and emissions, says Bikeplus.

“Although we’ve suspected for some time that bike-share schemes have great benefits, we’re now able to demonstrate how bike share encourages cycling, improves travel, and shifts people out of cars, making them happier and healthier in the process.”

Proportionately more women use public bike share than ride their own bikes, claims Bikeplus. 25 percent of cycle trips on owned bikesre made by women, but 42 percent of people riding shared bikes are women, claims the charity. Half of all those surveyed started to cycle or increased the amount they cycle as a result of the bike share scheme, found the survey.

"The results indicate that bike share is an important tool to help to normalise cycling and provide the last mile extension to public transport," added Roberts.