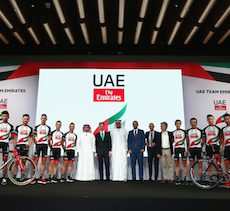 The UCI World Tour team will line-up at the Abu Dhabi Tour with new co-title sponsor Emirates and partners with ADS Securities and the International Golden Group.

The team – which last December was awarded the final license to compete on the UCI World Tour – has undergone a transformation in recent months and will now be known as UAE Team Emirates. It will ride under that banner for the first time at this week’s Abu Dhabi Tour.

The support of the globally-recognised airline brand is a huge boost for the team. Emirates is the world’s largest airline, operating to 154 cities and 83 countries across six continents. The brand is known worldwide as one of the leading supporters of world-class sports events, teams and clubs and has enjoyed long-term sponsorships in football, rugby, tennis, horseracing, golf, cricket and F1.

Divisional senior vice president, commercial operations centre for Emirates Sheikh Majid Al Mualla said: “This is our first foray into supporting a professional international cycling team; there is no better place to do it than our home of the UAE.

“We believe that through our support of UAE Team Emirates over the next four years we will help bring the UAE to the world stage of cycling. Emirates aims to create more meaningful connections with cycling fans around the world, and we hope that the pro-cycling team will inspire continued development of the sport in the UAE.”

The announcement was made at a specially-convened media event in the UAE capital Abu Dhabi, which also saw the team confirm two further new sponsors: ADS Securities and the International Golden Group.

"This is a fantastic opportunity for IGG; supporting UAE’s top athletes is a habit that we are immensely proud of, and something which we have done in an abundance in the past,” said Mr Fadel Saif Al-Kaabi, CEO of defence and security services provider, IGG. “This latest partnership with UAE Team Emirates is particularly exciting given the massive developments having been made to unveil the new team to the world."